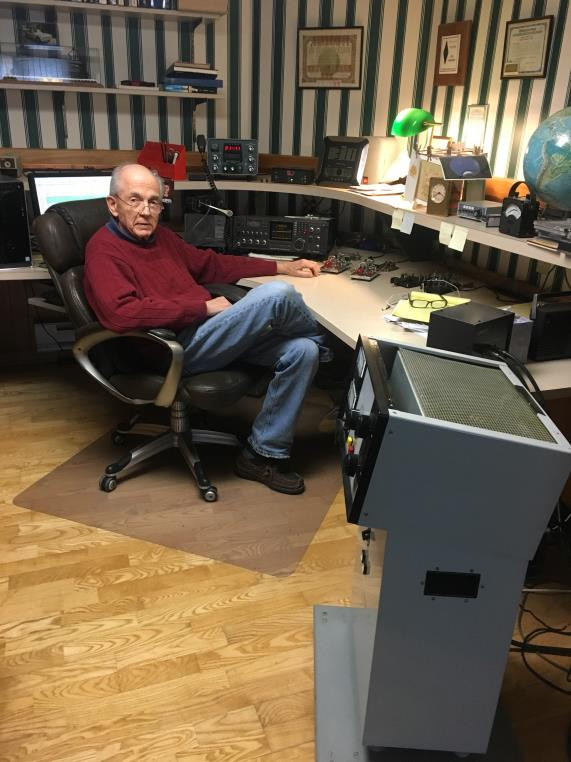 I was first licensed as W8SRK in Detroit, Michigan in August 1954. I was classically trained on a straight-key by our across-the-back-fence neighbor in Detroit, W8QIX, a real old-timer and CW stickler, who forbade me to touch a bug until I could smoothly handle at least 20 WPM on the straight key. Because of my musical abilities, I was easily able to hear the character-length, spacing and rhythm of CW and it came very easily to me.  By the time I passed my General test in early 1955, I had received the 30 WPM endorsement on my ARRL Code Proficiency Certificate.  The 35 WPM sticker followed soon after and it still hangs on my shack wall, 63 years later.  That’s when W8QIX (finally) gave me permission to get a bug, and my mom took me to Reno Radio in Downtown Detroit and bought me a beautiful Chrome-plated Vibroplex Original Deluxe key for my 15th birthday, in July 1955.  It’s also about the time I started QRMing my mentor on 80 CW!  I had followed in his footsteps as as a traffic handler and net control on the Michigan QMN net and was raising havoc with his receiver, about 100 feet away.  So, I hung a sloping 40 meter vertical out of the tree in my backyard and migrated to 7 mHz with my new DX-100.  The DX bug bit me when I worked G2DPY on 40 CW and I never looked back. I made DXCC before going off to college and, over the next 50 years, with time out for the University of Michigan, the U.S. Navy and raising my family, somehow I made it to the top of the mixed honor roll (mostly CW).

I became W8KR in 1976 and moved to Edina, Minnesota (a suburb of Minneapolis) in 1977 and, along the way, became more interested in QRP DXing and rose-gardening than chasing new countries. I sold my 80-foot crank-up and TH-7 about 20 years ago and started building verticals for winter fun, after putting my rose gardens to bed for the year (it typically goes to -26 C here in the winter). After several iterations, I have learned that well-constructed verticals with lots of radials make very good DX antennas. My latest effort is “The Rose Garden Array”, an elevated 4-square phased vertical array for 20 meters (see my February 2005 QST article). My other antenna is an elevated 40M ground plane with sloping radials, which is a very competitive antenna on 7 Mhz.

In 2018, I will have been on the air for 64 years. Look for me on 20 and 40 CW from November to April, and usually in my organic rose, perennial and vegetable gardens from May to October.  However, now belonging to CWops, I plan to put up a simple wire antenna for the summer to stay active in the club and mentor new CW operators, so this will hopefully be another revitalization of ham radio for me.

My station is an ICOM 781 and a much-modified Henry 2K Classic X (two 3-500s in parallel).  My primary station key is still my beautiful 1955 Vibroplex Original Deluxe.  I also have a nice Vibroplex Original Deluxe Presentation model and several other vintage straight and semi-automatic keys.  I have played with keyers but have always reverted to my Vibroplexes, so as not to affect my bug fist.