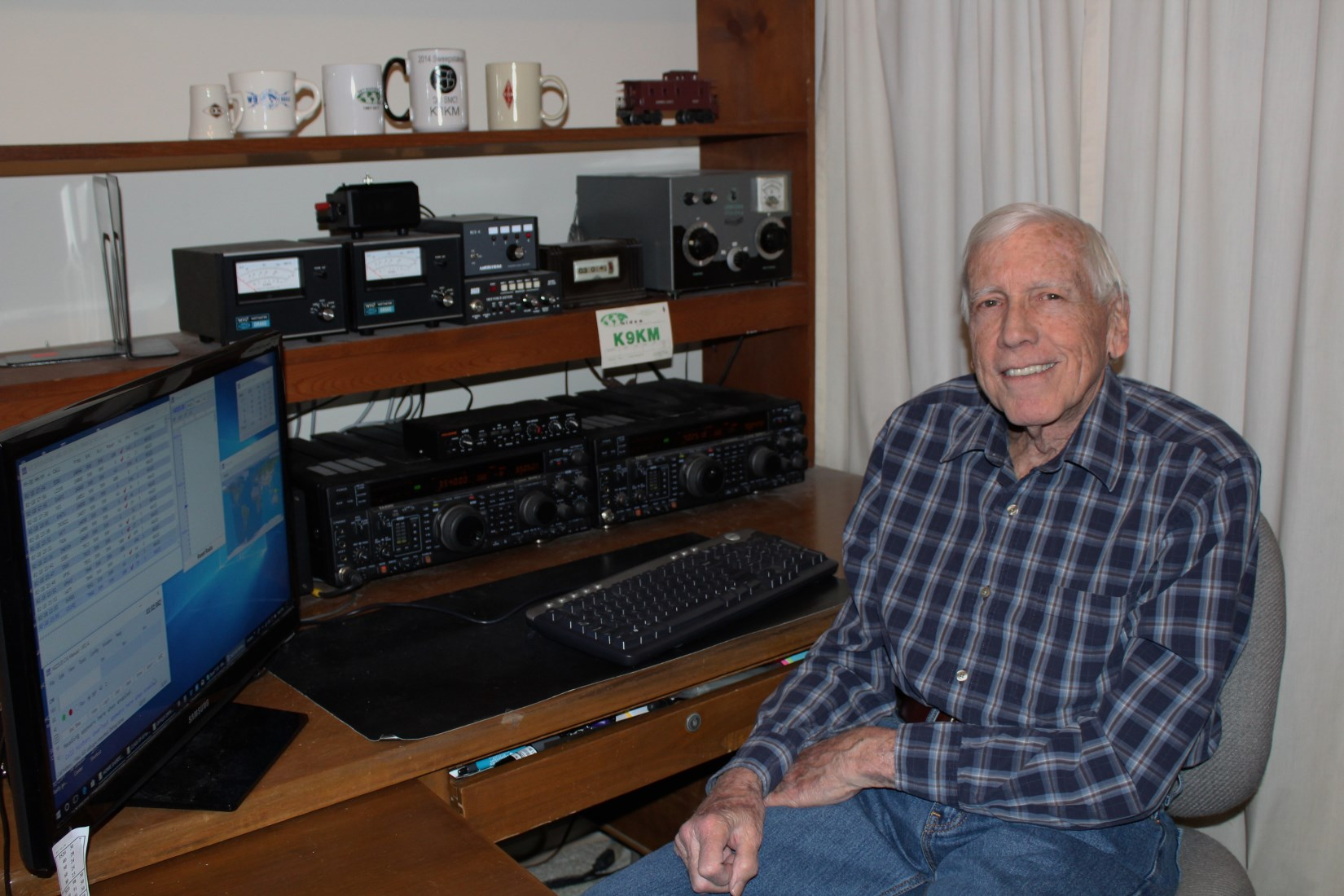 I thank my sponsors who encouraged me to join CW Ops. CW has been my mode of choice for many years of DXing and contesting.

It all started in the seventh grade with a crystal radio and then a Knight Ocean Hopper regenerative 3 tube receiver while I attended a small rural school with eight in my class. It was fascinating by what I could hear.

In 1959 I started high school in Liberty, Indiana with 53 in my class. In October my Novice license arrived and KN9UKM was underway with that Knight Ocean Hopper, a borrowed homebrew transmitter, a few crystals, a wire across the front of the house and of course a straight key. With all of that, I had a good start on WAS. Next year in the spring I went to Indianapolis with my father for the General test and passed. On that same trip with my father’s help, I upgraded to a used Hallicrafters S53A. About the same time, I built a transmitter with two 807s from a QST article using parts from an old RCA TV. My mother also helped to get some parts and tubes from a service store. While waiting for my new license to arrive and still a Novice, the new receiver and a 40M dipole were good for a QSO on 40M with VK3XB in Australia and several WH6 QSOs. That was my start in DXing. My General license arrived several weeks after the test and K9UKM was underway. I am grateful for my parents who were encouraging and supportive. One more comment on high school is necessary, I took one semester of “Typing” where the class had individual mechanical typewriters and a stern but very nice teacher watched all of us carefully. That is of significant value today for computer logging which I have been using since 1998.

With the General license I added a VFO and an EICO AM modulator built from kits and worked lots of CW and AM DX, mostly on 15M, with the 40M dipole. My first real contest was the New Jersey QSO Party, entirely CW, which I thought was lots of fun. I found more contests and participated in those too including the two weekend Sweepstakes. This was all with a straight key! Sometime later I built what I remember was called the POO key, a keyer with one tube and a relay. I also made my own paddle and it worked. The timing was not so precise, but it must have sounded OK. There was some down time later in high school as I started English and Calculus at Earlham College night school during my last year of high school. I rebuilt my transmitter several times and finally on a smaller chassis with two 6146s.

In 1963 I enrolled in Electrical Engineering at Purdue University. I joined the W9YB club which was an opportunity to learn more about amateur radio. I was a co-op engineering student and worked at Philco and later Delco Remy on alternating semesters. I joined Theta Tau Fraternity and managed to have a station there along with my roommate WA2SKY now N7IP. We had a Warrior amplifier and a 14AVQ on the third floor roof. It worked very well but the lights in the dorm on the upper floor would glow dimly in a CW pattern. With some cash I had from some different jobs, I bought a new Hallicrafters keyer and a Vibroplex paddle which I still have. In 1967 I upgraded to Extra. In 1968 I graduated with a BS Electrical Engineering.

After graduation I married my wonderful wife Nancy, now WB9HGN, and we moved to Florida for my first job at ECI. The beach at St Petersburg was great and I learned more about RF and filter design. As required I had a new call, K4CRD, and received a new DXCC certificate. After two years in Florida, I joined Motorola in Schaumburg, IL and returned to the Midwest to be much nearer to our families. With that I applied for a new call again and was assigned W9LVH and soon turned it in for K9UKM again and also WS9UCI, a special event for Union County Indiana in 1971 and K9KM in 1977 when the two letters were available. My first assignment at Motorola was to design the receiver RF circuits of the Triton FM Marine two-way radio and later I was the design leader for all the RF circuits of an early 800 MHz cellular mobile with rather stringent specs to be used for testing the first cellular system in the US and then some more RF design for the Scandinavian 450 MHz cellular system. I earned a MS Electrical Engineering degree from Illinois Institute of Technology in 1984. During my 38 years at Motorola I had a variety of assignments and travelled to 23 countries on five continents. It was a good experience. I retired from Motorola in 2008.

I served as ARRL Central Division Vice Director with two different directors and recognize the need for a strong organization to represent our needs. I joined NIDXA in 1972 and SMC (ILL Wind at the time) in 1977 and have learned much from these groups sharing ideas spanning more than 40 years. Both are prospering. W9DXCC hosted by NIDXA is thriving. Our son and daughter earned their Technician license while in college and may become active in the future. We are fortunate to have these groups, the N1MM+ team and now CWops, and the commercial equipment providers who have had a major impact on how we use CW and other modes. My favorite contests are NAQP CW, NA Sprint CW, ARRL DX CW, Sweepstakes CW and Illinois QP. My DX totals are somewhere around 320.

Today I operate almost entirely CW. I have a second station in Indiana with a 40M dipole and was able to do two weeks of W1AW/9 CW from Illinois and Indiana. With low power and wire antennas I can work almost all that I can hear. My main equipment at the home station in Illinois is two FT1000MP MkV, an 80M dipole fed with 300 ohm TV twinlead that works well with a Johnson Matchbox on eight bands and a vertical for 20 and 40M fixed tuned. This is not really SO2R but is similar to my station in the late 70’s which included two Drake C Lines. SO2R was with a four position rotary switch: T1-R2, T1-R1, T2-R2, T2-R1. I have not used an amplifier in 27 years since our last move. I am working to change that and also to bring together all the filters and control equipment for SO2R.

One more thing, I do have a paddle, a Bencher paddle that I have used for 40 years. It was removed from my desk before the photo.