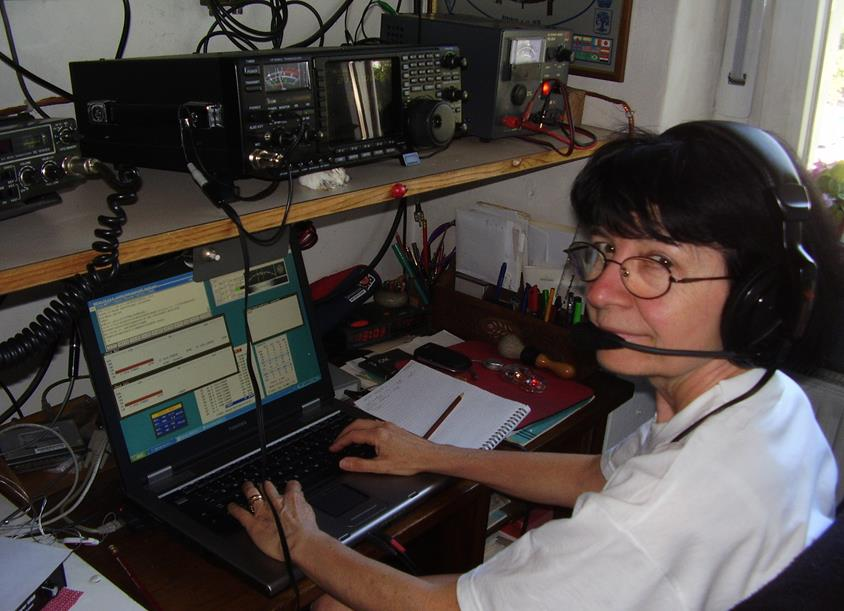 A few years ago, in 2014, I discovered that in the early morning in 40m there was a short contest even during the week. I liked to answer the USA stations (at the time they were heard much better than now, other propagation). My fairly casual participation must have been noticed by my Italian colleagues. Soon I discovered the CWT and CWops. I asked Giu IT9VDQ for help explaining how and what to do to participate in the CWT. Once the software was set up it was a great fun. At the end of the session I entered my poor results in 3830 and some comments.

Then at the end of 2016 I got the nomination to join the CWops, which I accepted with enthusiasm and pride, and now I’m here to fight for my first silver medal.

I’ve been licensed since 1974 and started to QSO on January 1, 1975. That day my husband forced me to take the microphone and greet the OMs he was talking to. But since that day, the radio has slowly become my kingdom.

In 1979 I started to study again the CW on my own, listening to a station in 80M transmitting every evening groups of 5 letters or 5 figures for 2 hours in a row. Since then, the CW occupies 90% of my activity, the rest is SSB (a little) and RTTY.

I have a small station: a vertical multiband antenna from 10 to 80m, a K3, an Icom756pro3 that I need as backup radio, a series of dipoles that help me receiving in noisy conditions, and no linear amplifiers (never had one).

I have a lot of patience, which is needed every time I’m not being heard or when I hear an ? from the other side, just before listening to the DX CQing in my face.

I live in center of my city, surrounded by high mountains, so I can’t do much. Furthermore, I am afflicted by any kind of electronic noises, and every year there are new ones adding. Even at night the noise is not lessened.

Despite my poor resources, my DXCC-CW, has reached 316 countries. Since I retired 4 years ago, I made a big jump ahead, being able to stay at the shack in periods in which in previous years I was busy at work. I was an accountant.

In 2009 I received an invitation to participate to a contest in the IR4M team as a guest. For work reasons I could join the team only for the CQWW DX CW: it’s been an incredible experience, first time in an important team, and in the main cw contest of the year, the first time in a run with a lot of stations responding (and it was not the Morse Runner, they were true OMs!).

Being the first woman operating from the team (still I’m the only one), I think I did not have behave badly, as the following year I was invited again and so on until last year.

I like to stay at the shack without anxiety of having to necessarily work the DX. When it happens, I’m happy, otherwise it will be for another time.

Even a nice rag-chew with a DX is always a great satisfaction, although for my poor English the QSO doesn’t last more than 15/20 minutes. It’s very nice, during a contest, to hear “TU Helga” (or “Ina”, my nickname), even if sometimes I can’t remember their name, because I know it’s one of those that I work every Wednesday/Thursday.