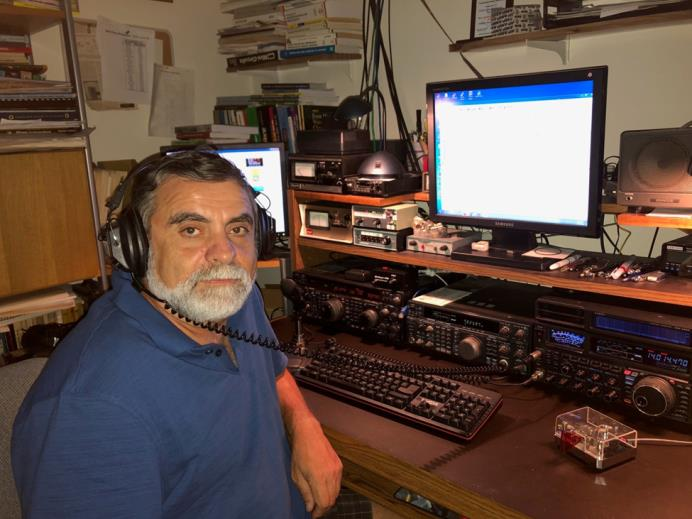 My journey into ham radio started in the ‘70s, when I was in elementary school back in my native country of Romania. At that time, there were certain state-organized activities and clubs for young kids, which were called “pioneers clubs,” a concept similar to boy and girl scouts in the United States, but with a much wider range of activities that were all oriented towards children.

One day, I opened the door of such a club. It was the “Electronics and Ham Radio” club. I still remember today how impressed I was hearing from a speaker for the first time that music of dits and dahs. I immediately learned that the operator was in a QSO with somebody abroad, and I became fascinated by

Morse code and by the fact that you were able to communicate with the outside world – something that was not to be taken for granted at that time in Eastern European countries.

Lucky for me, the professor in charge of that club was YO3ND, one of the best-known instructors in the country. He became my first Elmer, and I’ve maintained a lifelong friendship with him – even now after so many years. Morse classes were every week, and I don’t think I ever missed a single one. Slowly but surely, my ears started to differentiate between a “S” and a “H” and between a “H” and a “5” – Hi!

I was driven by my wish to learn the code. As a funny anecdote, I remember carrying an old tape recorder that weighed about 15-20 pounds from my home to the club building – a distance of 4-5 miles – for each of these early Morse classes. I would use the tape recorder to record the class, and then once I was back home, I would practice reception. It makes me smile now thinking about it. Today, with Morse Runner, Rufz, etc., we are spoiled now!

At the club, I also became hooked on contesting. The club was very active in contesting using their special call sign YP3A. I spent endless hours filling out pages and pages of calls and checking for dupes. Some of us may still remember that process…no N1MM at that time, Hi!

At that same club I encountered for the first time the world of electronics. I learned to read the color code on resistors and capacitors, to solder, to work with transistors and to build radio receivers. The club offered all kinds of easy kits for kids who were interested, and the instructor was always there to help.

When I turned 18 – the minimum age to be licensed – I registered for the licensing exam and passed. After a while, I got my license in the mail, with the call sign YO3MS.

Opening the door of the Electronics and Ham Radio club that day so many years ago ultimately defined the path of my professional future. I became hooked on electronics, and years later, I became a student at the Polytechnic Institute of Bucharest with a major in Electrical Engineering. In college, I had my second great Elmer. A professor teaching some of the RF courses was a well-known ham, YO3EM, and I became one of his students. During my time in college, under his supervision I built all kinds of ham radio equipment and accessories, all from scratch. In that part of the world, at that time, there were no kits available for purchase on the market. But the silver lining was that I learned how to calculate and build receivers and transmitters, how to use equipment to crosscheck theoretical results with empirical ones, and how to tune and troubleshoot that same equipments when needed. Building my own valve power amplifiers was yet another fun chapter of my time in college. Learning about PA operating classes, biases, filters, and working with high voltages – everything had its own appeal.

And sure enough, with YO3EM’s mentorship, I developed my final project for graduating the engineering program, which was a “Solid State Ham Radio Multimode-Multiband Transceiver”. It’s been in service at the School’s club station, YO3KWU for a while. We, too, have enjoyed a lifelong friendship.

This hobby really stuck with me. Even after relocating to the US, I of course had to become “radio-active!”

After arriving in the US, I got involved with the ham radio clubs in my area – Bergen ARA and Fairlawn ARC in New Jersey. At the first opportunity, I went to an exam session, and as I had a ham radio background, it was not much of an issue to pass the licensing levels all the way up to Extra in one session – including the Morse test at 20 wpm (at that time). A few days later I got my first US call sign, AA2WZ. When the vanity call gates opened, I changed the call sign to N2GM, which I continue to hold today.

Within our hobby, my main interests are related to constructions, DXing and HF contesting.

In terms of wishes, I (like many of us) would like to have a larger property to accommodate more and larger antennas, but living in New Jersey, in a suburb of New York City, I know that this will probably always be on my wish list. My contesting performance is thus limited from this point of view, but the most important thing is to have fun and achieve personal satisfaction. From the DXCC point of view, I am on the Honor Roll, still waiting for the last 4 to make it to the top.

I am a member of ARRL, NJDXA, Bergen ARA, Fairlawn ARC, North Jersey Contest Club, YO and Friends RC and Columbia University ARC, where I am trying to help welcome newcomers into our hobby. In fact, lately there has been quite a bit of interest among the undergraduate students, which is very encouraging.

Professionally, I am an Electrical Engineer working for a company that manufactures electronic test equipment for the utilities industry.

I’ve been married for 30+ years to my lovely wife, Diana, who, happily, has an understanding and acceptance for my hobby, as well as for those contest weekends and DX nights! I also have a grown daughter, who at one point showed some interest in learning Morse code…though it did not last long, ha ha. C’est la vie!

Apart from ham radio, my other interests include skiing, playing tennis, biking, a bit of hiking and a more recently developed interest in sailing.

And last but not least, I would like to thank both Jim (N3JT) for nominating me, and my sponsors. I am proud and honored to be accepted as a club member.

See you in one of the next CWTs!