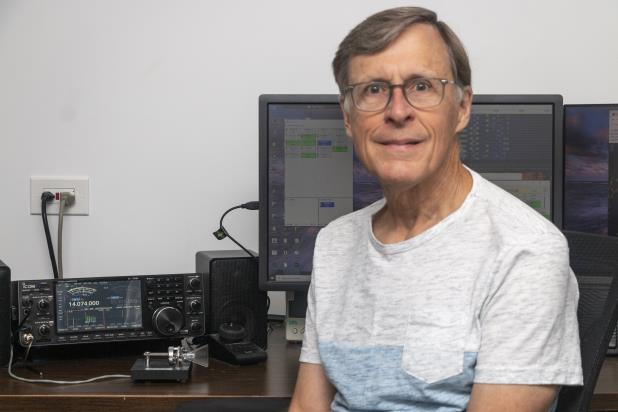 I have lived in Lake Villa, Illinois for three years. I am originally from Michigan, but have been in Illinois since I joined Motorola in 1973. There, I was on the team that developed the first portable cellular phone and I also designed the receiver IC used in it. For the rest of my career, I continued designing and then managing the development of RF and IF ICs for cellular phones.

I was first licensed in 1966 as a Novice with call WN8TDR. My first rig were two kits, a Heathkit DX-60B transmitter and a Lafayette KT-340 receiver. The antenna was a roof-mounted Hy-Gain 14AVQ vertical. I co-founded the Shores Amateur Radio Club with other teenage hams. Upgraded to General, Advanced and then Extra before 1970 and built a Heathkit SB-101 transceiver. I have operated on most bands 160-2 meters and 70 cm but never on 80 or 6 until recently. My new rig, an Icom IC-7610, is the first that includes 6. I currently operate 40-6 mostly on CW or digital modes using an attic fan dipole and have plans to build a loop antenna covering 160, 80 and maybe 60. For 2 meters I use a MOCOM 70 Consolette base station that I added a synthesizer to and a 2m/70cm antenna in the attic. I have achieved WAC, DXCC and almost 8-band WAS using FT8. I still need Alaska and Hawaii on a couple of bands.

In the mid-80s, I was part of the Illinois group of TAPR packet TNC beta testers. I ran HF packet propagation tests on 30 with Bob Bruninga, WB4APR, of more recent APRS fame, shortly after the band became available. I was using the Drake twins, an R4-B and a T4X-C. This experience motivated me to ditch vacuum tube radios and get a synthesized rig for stability, an Icom 751, which I used for more than 30 years. In the mid-2000s, I became interested in software defined radio and used QRP SDR kit transceivers (Softrock) mostly on PSK31. I have also been involved with home computers since I wire-wrapped an 8080-based computer with 4k of memory in 1977. I currently dabble with single-board microcontrollers like the ESP8266, ESP32 and Arduino.

I am the Secretary of the McHenry County Wireless Association and have made a series of presentations covering inexpensive test equipment for  hams. I also participated in this year’s Field Day with the club. My previous Field Day was 50 years ago in Michigan. I am also a member of the North Shore Radio Club.

In order to prepare for Field Day, I took the Intermediate CW Academy course guided by Bruce Plantz, K9OZ. I participate in the CWT and SST sessions almost weekly. I am not as good with head copy as I would like. I would like to thank Andy Goss, AA5JF for nominating me to CWops.