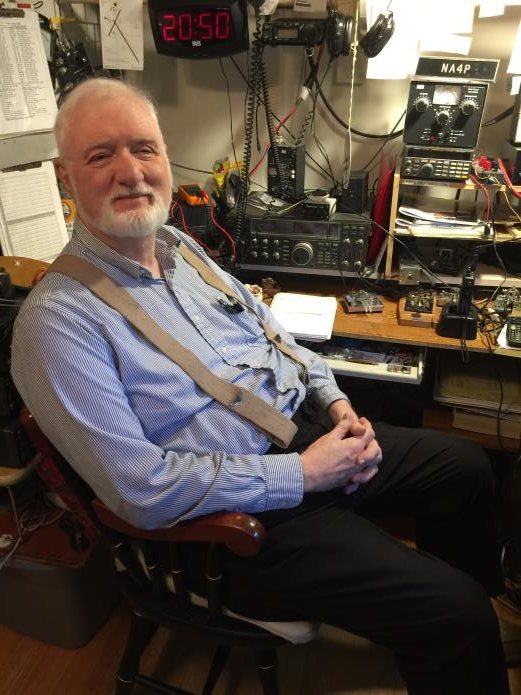 I received my novice license in 1977 with the callsign KA4FWH, not long after receiving tenure in the Department of Religion at Wake Forest University. My aim was twofold: to establish a communications link with my father (then KA4GSO, later KZ4Y SK) and to expand my use of the radio equipment I owned as a member of the Civil Air Patrol. My dad and I quickly moved our CW speed up to the required 13 wpm for the General Class license and established a morning ragchew that lasted for the rest of his life. In the meantime, I enjoyed my expanded capabilities in the amateur bands on 2 meters with my CAP equipment.

I found that the most efficient and pleasurable way to increase my code speed was through actual contacts with other CW operators; and as a result, I became an inveterate ragchewer, the activity I still enjoy most on the radio. My father beat me to the Extra Class license while I was on excavation in Israel in 1979, but I caught up in the following year, exchanging KA4FWH for NA4P.

As a result of one of those many ragchews, I joined the Waterway CW Net (WWCW) that met then on 7.050 MHz (now 7.053 MHz) and joined the sponsoring club, the Waterway Radio and Cruising Club (WWCC), rigging up an HF radio on our sloop Roma, so as not to miss a net. The sloop is gone now, but my association with the net has continued happily to this day.

My other radio activities have included 14 years of service in MARS (Navy and Air Force) and local ARES work. I also hold the station license for the Wake Forest University Amateur Radio Club (WF4DD). Additionally, I hold the commercial General Radiotelephone License and Radiotelegraph Operator License.