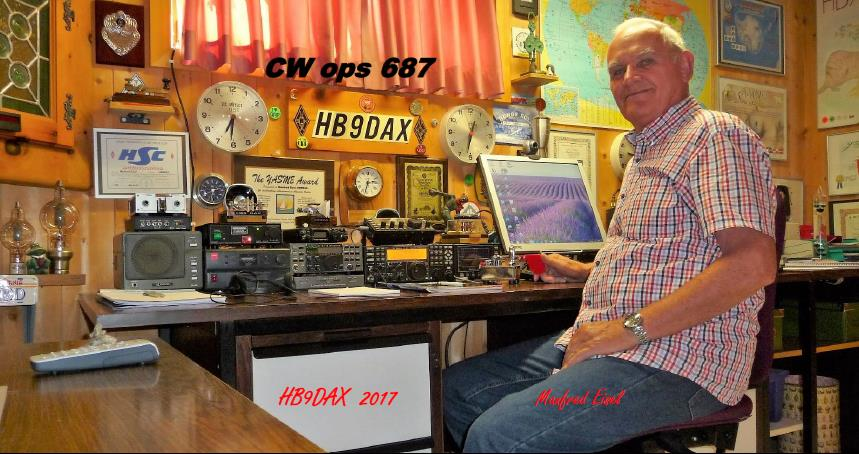 I was born in 1940 and from the 70 years on the 2 meter band, from 1984 on the short wave band especially in the operating mode telegraphy and low power.

There were no computers, clusters, and various tools. The small power was imposed on me by the authorities because I disturbed the electrical appliances with the neighbor. I had to be satisfied with the small performance and then worked in low power. It was nice for me to build QRP devices, for example Heathkit HW7-HW9 all with maximal 5 watts. My antenna was a 2el. Fritzel beam at about 15 meters height. My location was not good, but it was open to the north and south. To the east, especially VK-ZL, I had only 20° open, to the west I had a mountain about 2900 meters in the distance of 20 km in the way, but could work under good conditions these countries. I was able to take advantage of the sun cycles 22/23/24 especially 22 from 1986-1989 with a sunspot relative number of 165 optimally. In this time I get the very best DX countries in CW and QRP 5 watts.

To date, I have worked and confirmed 321 countries in CW and QRP with 5 watts. My equipment was Heathkit HW7-HW9, then Elecraft K2. Today I have the K3 and for QRP the KX3, super low power devices. One should put more emphasis on the operating technique during the test. And something positive about QRP, with low power the antenna gets more weight, because an old proverb says, “The antenna is the best amplifier and makes less interference.”