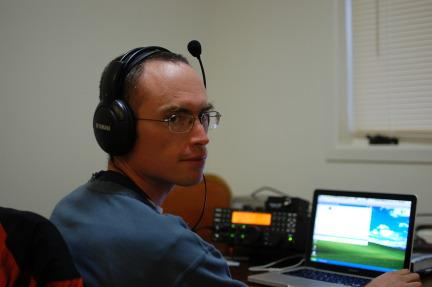 Thank you to Ed, N3CW, for nominating me and to my sponsors for confirming that I’m not a complete and utter lid.

I was first licensed at age 12 in the early 1990s wave of “no-code Technician” operators. My father (N8ZYL) and I were licensed together. The VHF FM scene did not really do a lot for me; fortunately, I remained interested enough in the hobby to earn some HF privileges, rising to Amateur Extra class two years later without really operating much HF CW. I enjoyed operating HF SSB but at the bottom of the solar cycle with 100w and a low dipole, it became increasingly frustrating. I made my first CW DX contact in January of 1997 and really havenever looked back.

Until about six years ago, I had a pretty modest station employing only wire antennas and a pair of Kenwood TS-930S transceivers with a TS-700S for 2m. Since then, I’ve slowly grown the station quite a bit, replacing the Kenwoods with an Elecraft K2 and K3 and adding amplifiers as I have found them on attractive terms. We moved to a more ex-urban QTH and with more than a little assistance from my nominator N3CW, I also now have a pair of Army surplus 16-meter high portable towers that support monoband Yagis for 20 and 15 meters and a variety of wire antennas for the other bands. I am active (CW mostly, with some SSB) on all U.S. amateur bands between 160m and 70cm, except 1.25m and 60m. A significant fraction of my antennas and station accessories are homebrewed and I built the Elecraft radios from kits. I primarily use a Schurr Profi-2 key.

Due in no small part to my interest in amateur radio, I studied electrical engineering in college and graduate school and I’m now employed doing ionospheric physics and radio science research at a university-affiliated research center. This career choice enables me to do radio all of the time and affords travel to some pretty exotic field locations, which occasionally result in casual DXpeditions. I’ve had the privilege to operate from KL7, KP4, KH8, OX, JW, and PJ2.