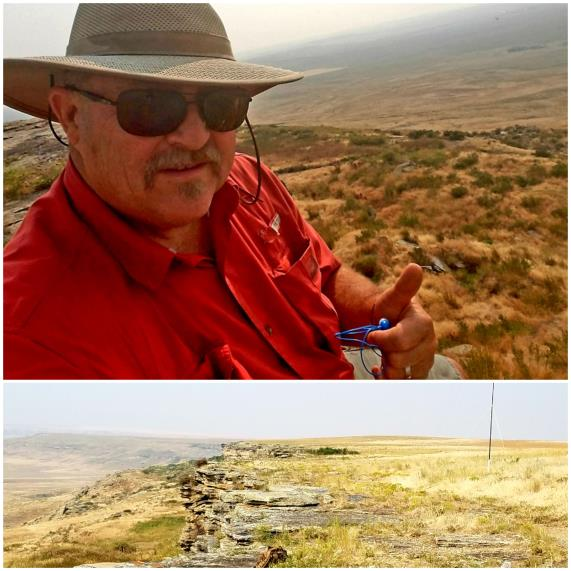 In June of 2013 I bought a handitalkie to use while fighting range fires as a volunteer firefighter and earned my Technician license.  I could program in 2 meter repeaters and the fire band to use the HT for firefighting and personal use.  After using HT for volunteer fire dept for years, I decided to learn CW as a brain exercise.

In November of 2019 I earned my General License and kept studying and passed the Extra in December.

To be able to use CW I decided to put up a G5RV to utilize a loaner transceiver, Kenwood TS-440 S, from AB7CE.  As an avid QRP DX op, Leroy gave me a TenTec 40-20 QRP rig and a new world opened. I listened a lot and occasionally worked SSB. The CW sounded very intimidating.

For Christmas I told my daughter I wanted a Pixie kit as a present and that started my building adventures. The next was a QCX 40m. Frustrated with learning CW on my own I jumped in on a Montana Traffic Net and asked if anyone knew of a good way to learn CW. K7YD, Doug, Net Control told me about CWops CW Academy. I missed the signup date for the winter and put in for spring 2020. N7ID, Mike and K4EES, Kenneth were my first instructors and they helped me to get a solid base in their Basic Class. Much better than working on your own for sure.

I set a goal of running QRP portable out of elk hunting camp in the fall as an incentive. I started building antennas of all sorts and QRP models based on the designs of K6ARK. With loads of confidence, I would go to the top of the buffalo jump near me and chase POTA/SOTA sitting on the cliff edge using the little TenTec. Calling CQ I would get replies but my head copy lacked seriously beyond the basic exchange. I tried to activate the First Peoples Buffalo Jump on POTA and was very humbled when the first four Ops were running bugs and I had to have so many repeats the pileup got tired and left me with only 4 contacts and more determination. I took two summer practice classes one with AC6AC, Buzz and NM5M, Eric and signed up for fall classes with WA9CW, Tom and WC4CFN, Steve. By this time I had picked up a number of QRP riggs including a MTR3B.

Elk bowhunting season started on the same day of Tom’s first class so I missed that. We set up camp and I threw a 40m EFHW into a tree. Laying in my cot at night I picked up a signal of someone calling CQ CWT on a Tuesday night. I answered it and it was Lloyd, KH6LC working Giving it Back. Meeting my first ham goal really pushed me to progress. I signed up for Advanced class with KK5NA, Joe and with him and a great class of top ops I made the best progress in a single class. Thanks to Joe and the class I was offered the honor of joining CWops. I worked both field days and a few other contests but am driven to more ragchew capability and QRP.

I must admit my progress is mostly due to the friendships and encouragement of all the instructors and classmates that encouraged me and pushed me forward. Thanks to CWops and everyone in my classes to date. What a great start to a CW hobby. Some of the very best gentlemen I have ever met have been CWops. Thanks to you all and the great friends that I now have.