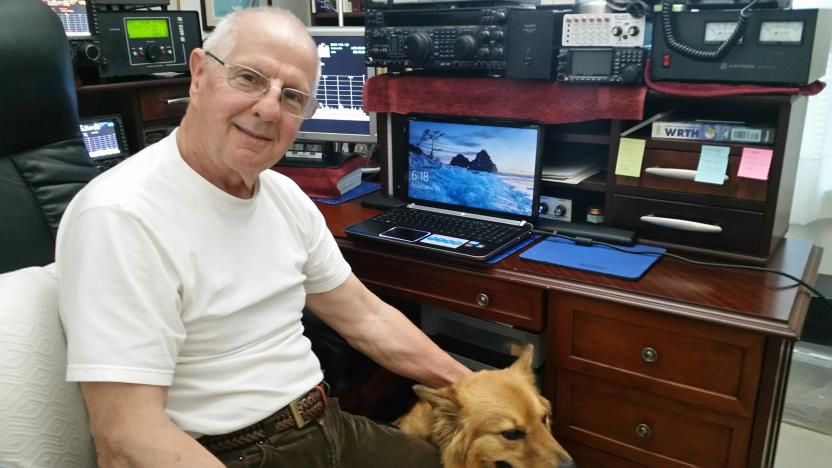 I received my Novice radio amateur license in 1961 as WV2TQN in Celoron, New York. Celoron is a small sleepy town in Western New York. Prior to that, I was an avid broadcast band listener/DXer and belonged to the National Radio Club. I learned code early in life and that helped determine my military service as a Navy Radioman. I served as a Radioman aboard COMSEVENTHFLT on the USS Oklahoma City and USS Providence from 1964 to 1967, homeported in Yokosuka, Japan.

After my military stint, I went to school and passed the Foreign Service exam. I spent 35 years overseas at US Embassies. For a number of years, I specialized and was stationed in West Africa. During home leave from Niger to Upper Volta (now Burkina Faso) I upgraded my ticket to Extra class. I was on the air in India, Zaire (Congo), Philippines, Greece, and other countries. This was my “contest and DX years”. I had a ball. You may have worked me as VU2RCK, DU1KK, SV/WN7S, 9Q5DX or others. At most locations, I was permitted to ship Yagi’s and Rohn 25, 60 feet towers. My hay day contest years were in the 80s and 90s. I only participated in the CW contests. Aside from the standard contests, my favorite was the All Asian CW DX contest. The JA’s were really disciplined. Lots of great memories!

Once totally retired, I settled in a HOA location in Northern Virginia 25 miles west of Washington, D.C. On my wife’s side, we have lots of relatives in the area so moving to a great QTH that would allow towers was not feasible. Maybe next lifetime. Also, she still works for the US government. My “big gain” days were doomed. Once settled and on the air, I realized that I was DXCC at a number of overseas locations, but not in the States. This was great grist to pursue stateside & DX awards. This has been fun pursuing them from a humble abode.

Once you have had towers, beams, amps at DX locations it is very humbling to be stuck in a HOA. I currently have good equipment but need to keep low profile with my antenna systems. That is where “real gain” is developed. My old logs were destroyed so I started out from scratch trying to chase DX. At the CWops mini tests, I squeak out my code on a DX-88 vertical and a MA5B 22 feet off my deck. I’m amazed that some of the guys run 200 QSOs in an hour. You may or may not have worked me – however chasing DX, you have certainly heard me. I’ve been called “wrong VFO dummy” a time or two, maybe more.

While overseas, my wife and I spent a number of year’s scuba diving and sightseeing. Places like West Africa, Egypt, and Greece were simply breathtaking. There are memories that we will cherish forever.

I plan on attending Dayton/Xenia again this year. See you at the DX Dinner at the Marriot. Last year, I took my wife for the first time. She has no affinity to Amateur Radio – but she loved the Tanger Shopping Outlets that were located across the street from our hotel in Jeffersonville. I currently belong the The Ol’ Virgina Hams Club (W4OVH) in Manassas, Virginia. I have a ball and keep real busy during the yearly Field Day.

In sum, it is certainly an honor to be a member of CWOps. Thank You!