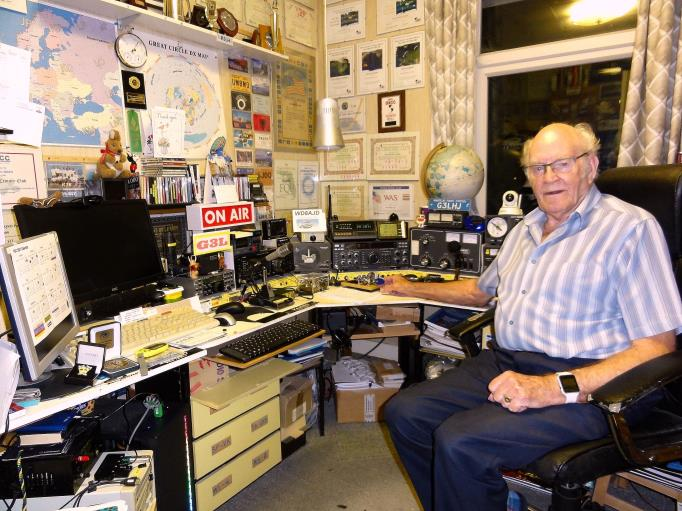 My start into CW was when I was 8 years old, my pal from across the road and I were in the Air Scouts, there was a Comms Badge which we needed for us to send & receive Morse at 5 WPM, to practice we set up a wire between our houses with a key, buzzer & headphones; sending Morse messages to each other was great fun, we soon got our Badges, that was during 1939 to the end of WWII. In 1946 my dad and I got interested in listening to amateur radio stations on an ex-government receiver, a R107. The transmit bug bit and in 1949 Dad took the RAE and passed, becoming G3GDW. We set about building our transmitter, an 807 in the PA. We had to use CW only for the first year; at the end of that year I was doing 18 wpm and really enjoying being a Junior op to dad, hi.

1953 saw me doing my 2 years National Service. Luck was with me as I went into the Royal Signals, after doing my Square Bashing I was sent to Loughborough as an “Op Special” on a 19 week course receiving CW! The pass out speed was 21 wpm, I was reading 20 wpm but had to learn all the Bard letters which didn’t take too long. So my 19 weeks turned out to be 8 weeks, and it was off to Famagusta, Cyprus, and 2 Wireless Reg, attached to a “Listening Station.” After settling in, I did a bit of scrounging at REME stores; I came away with a AR77 receiver which I set up in my bed side locker in our 4 man tent. I managed to get a 20 m dipole from the top of the tent to the NAFFI Flag pole, the guys help me build a small CW TX, 807 in the PA, again help from the guys and a trip to Nicosia to the Communication Department of Cyprus, a few strings pulled and I was issued ZC4LW. I had a lot of fun, I spent 19 months in Cyprus out of my 2 years of service, so I was sure glad to get home.

After settling back to civilian life again, in May 1956 I took the RAE and passed. In July I married Sylvia and we set up home in a flat. September I received G3LHJ. There was not much room for a station, but a cupboard sufficed for my SWL R109 + Converter RX, a homebrew TX for 40 & 20 M + a top band rig to talk to locals, and a 20 m dipole in the roof space + some wire.

1957 we moved across town to a Maisonette which had a 300 ft long garden & a spare room for the radio shack. 24 years were spent there. During that time saw home brew RX’s and TX’s constructed, a 270 ft long wire , home brew 3 band cubical quad. In 1965 I Joined FOC NR 841, in the 70’s I purchased my first “Black Box” a TRIO TS 510, had a lot of FB Q’s with that rig, much better for contesting, also started home brewing QRP rigs, joined G-QRP Club. I had a lot of success with them in CQ WW Contests, mainly single band 20 m QRP. In the late 70s I up graded the station to a Kenwood TS 530S. In 1979 Dad became a Silent Key and not long after Mum passed away, so 1981 we move and took over my Homestead. In 1990 I was made President of FOC which Sylvia & I very much enjoyed especially our trip to the States and the attending of the USA FOC Annual Dinner, it was great to put a face to so many Guys & Gals that had met on CW, in particular Jim N3JT, also the Visits to Fred K3ZO & Frank W3LPL’s superb Antenna farm & multi multi Station

My occupation from 1945 – 1988 was in the gas industry – the domestic appliance side, cooking, central heating etc, ended up as a technician/supervisor of my local British gas depot.

Well, that’s some of what I have been doing all these 82 years out of 90 and I have enjoyed every minute, and now some more enjoyment in being a member of CWops and meeting & making more like minded friends.