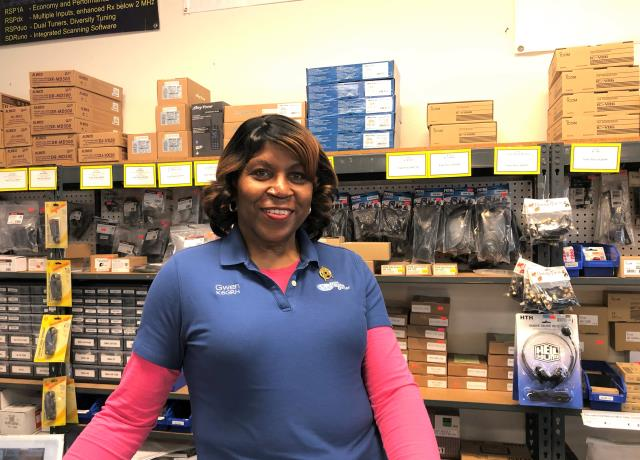 I’m indeed honored and delighted to be a member of CWops. It was a long and fun journey. I want to thank my Intermediate and Advance Instructor, Buz, AC6AC, who nominated me for membership. I also want to thanks the other CWops members who sponsored me as well.

A little about myself: I’m a Air Force Vietnam Veteran. I was stationed at March Air Force Base in Riverside California.

March was a S.A.C. Base which stood for, “Strategic Air Command”. I was a aircraft technician working on B-52 Bombers and KC-135 Tankers. I drove home on the weekends to my parents’ house in my 1965 Volkswagen Beetle. That bug and I had a lot road trips together. I now work at Galpin Motors Inc. in North Hills CA. I was on the line until I upgraded to program the vehicle’s SYNC system. It was like GM’s On Star system. I’ve been with Galpin for 30 years and I’m still currently working there.

I have three children and four grandchildren. My son has his ham license but my daughters, well not so much, I still have my grandkids to work on, Hi Hi.

I received my first ham ticket in 1987, my callsign then was, “KB6NDC.” I later changed it to “K6GRH.” I wanted my initials as my callsign and it looks pretty good on my car’s license plate.

How I got into ham radio is the funny part. It was in the late 1960’s, my grandmother had a next door neighbor who was a ham radio operator. His name was Levi T. Tell, W6IRE. He had a 30 foot tower with a three element Yagi antenna mounted on a rotator. The tower was mounted in his backyard near the house. Every now and then, that big Yagi would rotate east and west looking for DX or other local stations. My sister and I would spend some weekends at our grandmother’s house. This particular evening, we were all watching “Gunsmoke” on TV when an uninvited voice entered the set, “Yeah, your about a 579 over here in Compton CA”. My grandmother looked up and said, “That damn Levi is in my TV again!” I looked at her with raise eyebrows and said to myself, “What magic is this that would upset the TV and my grandmother at the same time, I have to check this out.” I finally had the chance to meet Levi and he explain to me the wonderful world of ham radio. When he showed me his radio room, it look like the bridge of the Starship Enterprise in my eyes. I learn a great deal of knowledge from him. He also gave me an Ameco tube type code practice oscillator. This is how I got started on my journey of CW and ham radio.

On Saturdays, I worked part time at Ham Radio Outlet in Burbank. The coffee was hot and the donuts were fresh. I had many enjoyed hours showing and telling eager customers about ham radio and CW. If you wanted to take the test for your ham license, we had enough VEs with myself included to get the job done. It was in this store where I met

Buz Tarlow – AC6AC. We got on the subject of CW and how I wanted to improve my CW skills. Buz, with a smile on his face, told me about the CW Academy and he was one of the instructors. He also explain how the Academy teaches you CW, the right way and how it promotes the communication to a higher plane. That advice got me started down the road and now I’m a proud CWops member. Will the student become the master? Well not yet, but through the CW Academy, I’ll helps others to reach their CW goals.