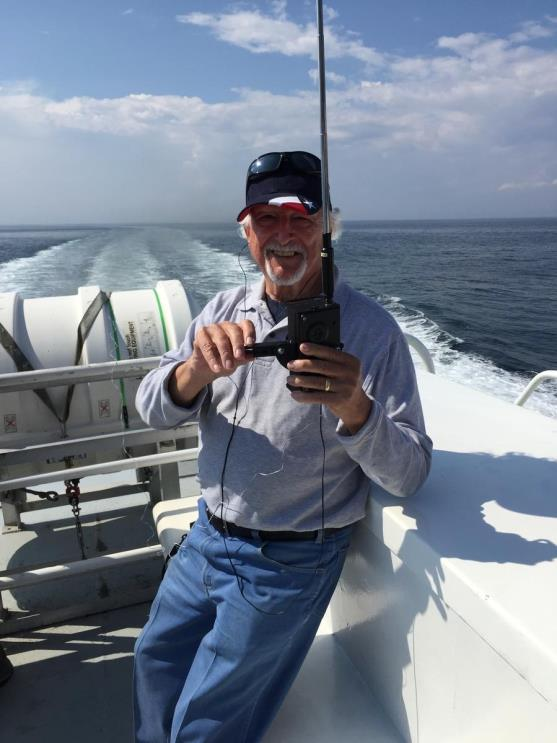 I’m an ex-pat Brit from London, UK and arrived in the US 1967. In the 70s I found the hobby of flying RC sailplanes and wanted to fly on 6m in contests avoiding frequency conflicts in RC contests, so I decided to get a ham license and took the test in Buffalo NY. I was so taken with CW after the test that nowadays I only use a mic for VHF/UHF. In recent times the frequency conflicts in RC has gone away with the advent of 2.5 GHz spread spectrum technology. So if I had found RC in modern times I probably would not have joined the ham radio fraternity.

In my bio picture I operated /MM while whale watching in MA, one for the bucket list. Rig was a KX2 with a 20m whip antenna and a trailing wire, keying with Pico paddles. Contacts were with the west coast and a DX QSO: the ocean sure is a great ground plane.

Early on I started out with an HW 101, then Ten Tec to Icom. Now an Elecraft “nut” and lately with QRPLabs gear. I built Elecraft’s early models and assembled the later ones up to K3S. I operate QRP, especially in contests

Antennas ath are a Hex Beam and a Butternut 80/40/30 and recently a 160m helically wound vertical on a 10m pole. Latest portable antenna is a Steppir Crankir, other portables are a home brew vertical, EFHWs and dipoles.

Not much of a speed hound or DXer but at 85 years old I decided on a new challenge with CWT, so thanks to my sponsors and CWops for membership. Also thanks to W0TG for guiding me through the intricacies of N1MM, no small feat for me. I always recommend CW Academy to CW noobies and have a couple friends who are instructors with the academy.