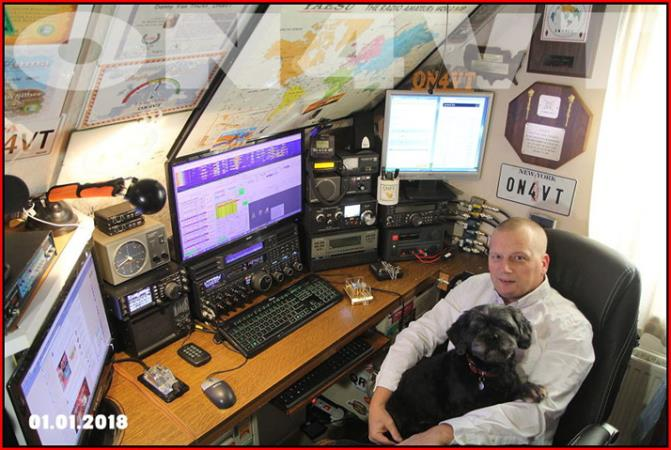 I was born in 1963 and am married to a lovely woman Huguette. We have no children, but we have a very spoiled dog called Julleke.

I became interested in radio at a young age, mainly listening to the offshore pirate stations (Caroline, Mi Amigo, Veronica, Noordzee) on the Medium Wave band. At the age of 16 I started as a radio host on a local 3m FM pirate radio station. I played music on different radio stations over a period of almost 10 years. In the meantime, I discovered CB radio and 11m DXing.

In 1990 I received my first Ham license ON1BBA (novice), soon followed by the full license ON4VT. I have earned DXCC Honor Roll (CW-SSB-Mixed) and at present have 1 country to go for the top. I have also received many major awards in SSTV and have CQ WAZ SSTV #001 and ARRL WAS SSTV #031. Those are the most impressive ones.

Due to failed neck surgeries I became a chronical pain patient and retired on medical grounds. I am now a fulltime Ham and houseman, but not always in the same order!

In my “second” ham radio life my interest is going to portable activations (WWFF, WCA, SOTA, LH), DIGI modes and I improved my CW skills a lot.

My hearing has dropped to 40%, mainly in the human voice spectrum, so I am not comfortable with voice QSO’s anymore. DIGI modes and CW are the perfect solution. Luckily I can hear CW tones very well! I enjoy ragchewing on Olivia and work the other types of DIGI modes as well.

Since 2014 I’m owning also the vanity callsign OT4V, mainly used for portable activations (over 250 so far).