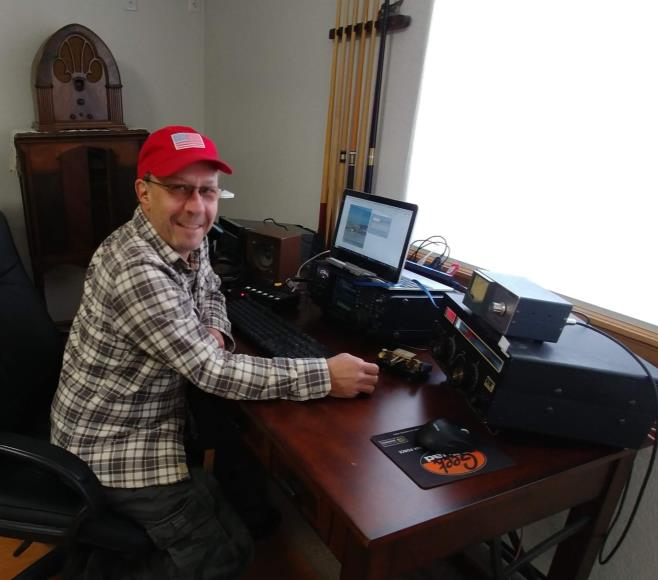 I learned of Ham radio in early 1972 when my dad (who was a part time watch maker) took me to someone’s shop to deliver a watch he fixed on a Saturday. The fellow (W9DGE – SK) took out a CPO and a straight key and started making noises! At 13 years old, I asked LOTS of questions!

Next day my dad took me to Allied Radio in Chicago and bought me an Archer code record. One week later I knew the code and took the exam with an old timer (Ed Trybus, he had a TV shop).

I didn’t own a microphone for a long time and took to CW very easily. I joined RAMS (Radio Amateur Megacycle Society) in Chicago where I was fortunate to know and be Elmered by the person who “Elmer” was named after, Elmer “Bud” Frohart W9DY/W9GFF.
I have always worked in radio since my first job with Ero Erickson of Erickson’s Electronics as a two-way technician. Never went to college but consumed everything I could find on radio and electronics.

I started my own two-way shop (Portable Clinic) after my move to LA in late 1979 where I became KV6I.

In 1996 I was in the first “Extra Class” window for the new vanity callsign program and received W7RF (my 1st choice). Continuously active, Mostly CW and some SSB since 1972. Ragchewing, DXing, some contesting, Elmering for my club. Encouraging CW as valuable and most enjoyable mode especially for HOA sufferers who really want to make contacts with minimal antennas. I only operate “brain decode” modes, CW and some SSB.
Today I own and operate a few radio related operations, Hamgadgets.com where we design and make accessories for Hams like CW keyers, repeater controllers, etc. We also still have some two-way radio business and do BIRD wattmeter calibration and repair.
I love making things for my fellow Hams, half of our designs are from requests “Dan, can you make me….”.

Experimenting with antennas is a passion and after our move to Fort Collins, CO in 2007, I now have land to spread out and build antenna projects. My easiest to draw on paper but hardest to build and maintain is the 1100-foot loop. I put up on four 70-foot utility poles spaced 280 feet apart and fed with ladder line back to a true balanced tuner. It is an amazing performer everywhere (160-10M).

Also, a 165-foot inverted “L” (65 feet vertical) over a bed of 55 radials 90 feet long each out in my back field that I use on 160/80. Also built an elevated feed, full size vertical with separate elements for 40/30/20. These are my best all homebrew performers.
I just added a downstairs hamshack in my house (my main hamshack is a 1600 sq ft shop/shack next to the house) so I can get on the air for the CWT’s more easily on those cold Winter early mornings in my PJ’s!

I have a cable running from the main shack to the house with whatever antenna I have selected to send over that day (and a 120-foot-long ladder line fed dipole at 30 feet that is dedicated to just the downstairs shack for all bands). See the antennas on my QRZ page.

I have been president for clubs in LA (WARC) and after our move, here in Fort Collins (NCARC).

TNX to all those who welcomed me and especially Glen NN6T, my CWops nominator. I look forward to the longer ragchews with all the operators I work in the CWT’s, it’s amazing how many callsigns are known or familiar!