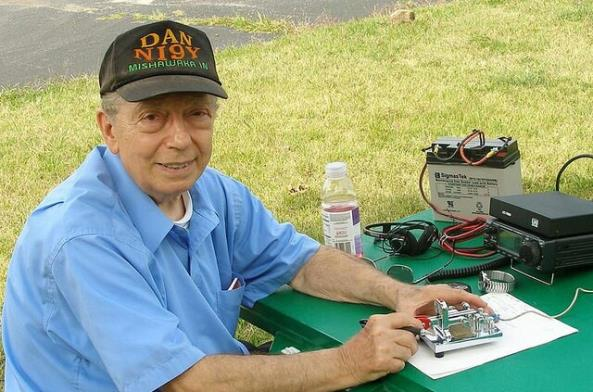 It all started at age 10 years old in 1950 when I found my father’s 1924 Radio Age Magazines. That was the spark that caused me to find out how radio worked. I built my first crystal set in 1952 using a Gilbert Erector set bolting all the long parts together for the antenna, then using a rusty coke bottle cap as the detector in series with an old 2000 ohm set of headphones. Then I heard music and figured it was magic. I then took off some turns off a coil wound on an Oatmeal box and with an IN34 crystal using a floor lamp as an antenna and listened to Radio Moscow and HCJB.

After church is was my job to run ahead to the newspaper stand and get the Sunday paper, and standing by the bookcase was an old man reading CQ magazine. I asked him if he was a ham and from that moment on, I was hooked fish line and sinker. He (W9JOZ) gave me the Novice exam and I got the call KN9EUV in 1955. Later I discovered he was an OSS officer in WW2. My hometown dedicated their radio club to W9JOZ. I then enlisted in the Navy as a radioman at age 17 in 1958. Three weeks after H.S. graduation, and eight weeks of boot camp at the Great Lakes Naval Training Center, I carried my seabag onboard the USS Shenandoah AD-26 in Norfolk, VA.

In 1961 home on liberty I met my YL on a blind date and after our first date I asked her to marry me. I gave her both rings when she came to Norfolk to see me. When she got back home, I received a wedding invitation to my own wedding so after being discharged had to carry my seabag back home on August 16th, 1961 and 10 days later I was married. I still have my first XYL.

She didn’t know I was a ham until I removed the speaker cover from our brand new 1962 Dodge Dart and squeezed in a Gonset Commander and two dynamotors under the front seat.

Today I operate before sunrise everyday rain or shine on 3.547, 3.552 MHz. Tune your radio to those frequencies when you think about it.