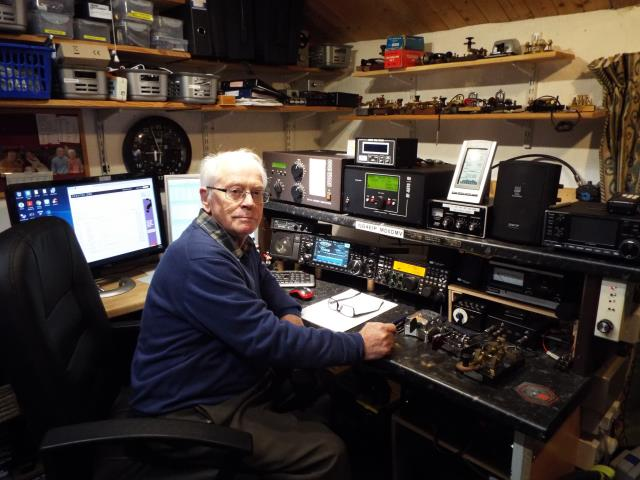 I first learnt about radio at the back of the Baptist church in Durban South Africa where I was forced to attend. A friend said he had a radio to swop and I duly did the swop. It consisted of a small rectangular Bakelite box with an arm which wiped across a coil of wire and a small tub of germanium and a lever with a thin wire attached at one end this was a diode. I did not know this at the time but later found this out in our local library. It was called the cat’s whisker.

I was fascinated and took it to pieces to find out how it worked and with the help of our school library I started on my adventure into radio, eventually constructing my own Crystal sets trying to obtain better selectivity etc.

My father bought me a one valve receiver kit which I built following the given instructions. The radio required two batteries to operate it, one to heat the valve and another higher voltage one to run the set.

My father was not electrically minded as he was a professor of art in Durban but always encouraged me in my hobby. A great father, and I would not be where I am today without him. Later when transistors became available, my mother bought me two OC70 transistors and now my crystal sets had an amplifier.

We lived in a maisonette and a new neighbour moved in above us who used to run a shop next to us. He was into scouts and one day he told me he could teach me the Morse code in one day. I took him on and I knew the alphabet in Morse code by the end of the day. He told me he was a radio amateur with a call sign ZS5OJ, Denis Logan. At our local radio shop where my father bought the receiver kit, I purchased with my pocket money a valve and components to construct a simple transmitter. I managed to get an old receiver to which I added a BFO, I was ready to operate. I was 13 years old by now. When Denis was in the shop, I would operate using his call sign. I knew the procedure as he taught me, probably a bad mistake, but I was curious and wanted to know everything about amateur radio including how to make a contact and what to say during a one. I wrote all this down on a piece of paper to follow once I eventually made one. I was now ready to operate and I eventually made a few using ZS5OJ. This all ended one day when Denis came home and heard me on the radio. That was the end on my amateur radio at the time. A year later we moved from the maisonette to a large house.

After I left school my father wanted me to do a degree in ART, I hated it and while I was in my second year, I told him I wanted to do electronics. I managed to get an apprenticeship with a manufacturing company called SMD, who designed and manufactured the Barlow Wadley XCR30 received. I was part of this design just before I left to go to university. Most of the designers were amateurs and the one director, Roy Larson, ZS6DN, encouraged me to become a radio amateur. By then I also found out that up the road from us was an amateur, Frank Wood ZS5FW, and every evening I would visit him and he encouraged me to copy the weather forecast in Morse code with him. Frank said that once I could copy this weather forecast I would be ready to apply to take the Morse Test. Eventually after a lot of copying I managed to copy the full forecast. Frank said I should now apply to take the test which was three minutes send and receive. There was no theory test in those days. I passed and received my call sign ZS5VF. Frank gave me my first transmitter which apparently was from WWII. The first year had to be CW only requirement of the licence and after the first year one could do all modes but limited to 50 watts until two years were up then full power of 100 watts. How times have changed.After a couple of years I bought a Geloso VFO and with a 6146 final I was now able to operate on all bands only CW. In 1969 I bought a second hand Collins transmitter and receiver.One day I decided to sell the Collins to help me to buy a nice camera and at the same time I met a lovely young lady, Ann, who eventually became my wife.

I needed to get back on the air again and bought a Heathkit HW101 transceiver kit. In the evenings, Ann used to read the instructions to me and I did the soldering and she would then tick the box to say it had been completed. It took nearly a week to assembly the kit and with the help of Ann to erect an aerial I was back on the air again. I used it mainly for CW and occasionally SSB. In December 1974 we got married and went on honeymoon and along came the HW101 with us so I can operate in case I was getting bored on honeymoon. On our way to the Drakensburg for our honeymoon I contacted an amateur who was having a picnic next to a dam which was half way to our destination, he invited us for tea but my wife put her foot down and we did not go and eventually reached our hotel in the mountains. I only made a few QSO’s during the honey-moon period. We are still married today and eventually many years later I managed to persuade her to take the City and Guilds exam which she passed and has the call sign MD0DMV. I started to teach her Morse but one day I received a letter from the RSGB thanking me for my service as an examiner and I was not required anymore as Morse was now not a requirement for a full licence. Ann just said, “I do not need it anymore do I ”, and stopped learning it. It was a shame as she was copying nearly 12 wpm.

My station has come a long way from my first station in 1962.