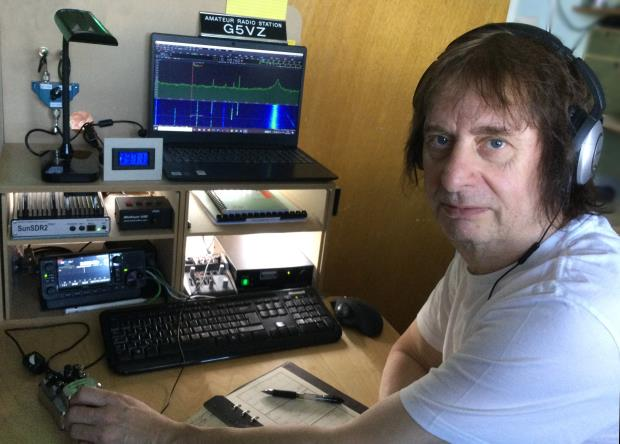 Around the age of 11, my youngest daughter showed an interest in amateur radio. It seemed quite natural as that was just around the age in my own life when ham radio became important. My daughter and her friend progressed through UK Foundation to Intermediate licences and, by the age of 12, they were on the air on CW. Of my other three children, my son has a career in hardware electronics and one daughter in IT development. My other daughter works in health care. I have four grandchildren but they are too young to estimate any influence of ham radio just yet.

I took the RAE in December 1968 but then life intervened. I wasn’t licensed until the turn of this new century.

Way back I spent plenty of time in the shack with Bill, G5VZ (SK.) It is his call I now have the privilege to air. I was also fortunate to be at school with the son of Bob, G3ORC (SK) who was Royal Navy and who introduced me to Morse. His son and I used to walk along the road to school making QSOs, dits and dahs with our voices.

Thirty years on and the opportunity to get on the air returned.

Once licensed, I became a Trustee of RAIBC – the charity working for radio amateurs with disabilities – and edited Radial, its journal. I was RAIBC Equipment Manager, providing accessible kit for members with disabilities and often rigging antennas for visually impaired hams.

With a passion for construction of all kinds I found a natural niche in QRP, joining G-QRP Club. I compiled the G-QRP Club Antenna Handbook and collections of projects by Drew Diamond, VK3XU. Visiting Dayton along with George Dobbs, G3RJV (SK) I enjoyed FDIM, and Hamfests at the Hara Arena, helping out on the G-QRP stand. I joined QRP ARCI while there. Also at that time, licensed US Amateur Extra, WG5VZ.

Homebrew QRP confirmed that CW really did get an edge. That led me to re-establish my Morse competence and to join FISTS CW Club. In Dayton I met Pietro and Bruna Begali and fell in love with their keys!

The rest is history, as they say. I edited Keynote for a time; was FISTS’ Activities Manager and for three years, beginning in 2013, Chairman of EuCW, The European CW Association. I came up with the idea for Snakes and Ladders, the EuCW activity that is still running – and continues to be popular – years later.

I work as a neuropsychotherapist, having studied post-grad applied neuroscience. I recognise that neuroscience is at the heart of learning and in developing non-conscious processes. This approach has allowed me to develop my own Morse skills, accuracy and speed, and to help others excel. Through this symbiosis of profession and hobby, I came to CWops with the encouragement of Duncan, G3WZD.