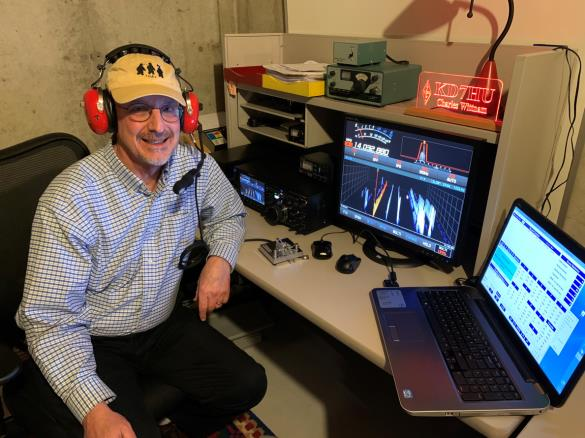 I would to thank all of my sponsors, especially Dick Walton, W7XT, for their support in joining the organization. As with most of us in the hobby, we owe a lot to all of those that have helped us in ham radio throughout the years. We can only repay them by helping others.

An aunt gave me a short wave radio when I was 10 and I became fascinated with the idea that applying electricity to a wire could transmit information to people thousands of miles away. I was hooked.

In high school I had a physics teacher who had a home brew ham radio station set up in his class room. He was a CW only operator who inspired me to get my license in 1970. My first rigs were the Hallicrafters HT-32B and the SX-111. I was very active in high school and was president of the amateur radio club at the University of Chicago for four years. However, I had to sell my station to pay for medical school and was only able to resume activity after my training was completed.

Career and family limited my operating time, but I was on the air mostly using a HW-8 and Ten Tec Equipment for QRP work. After retiring from my medical practice in 2018, I had to reintroduce myself to newer aspects of the hobby: digital communication, and LEO satellite work. I upgraded my station and after 50 years on the air became interested in contests for the first time. I soon learned that as a “little gun “ station CW was by far the most effective use of your power. I also learned that being from Montana was especially fun, since you are “DX” to a lot of operators during contests.

I am a member of the Yellowstone Amateur Radio Club, ARRL, AMSAT and the Big Sky Contesters. I stand amazed of the technical changes in our hobby that have occurred over the past half century. My current rig, the FTDX10MP has undreamed of capabilities compared to my first Hallicrafters rig. However some things do not change. CW is still a fun and efficient means of communicating, especially under challenging conditions. Amateur radio is full of great people who support each other. Those things remain the same.