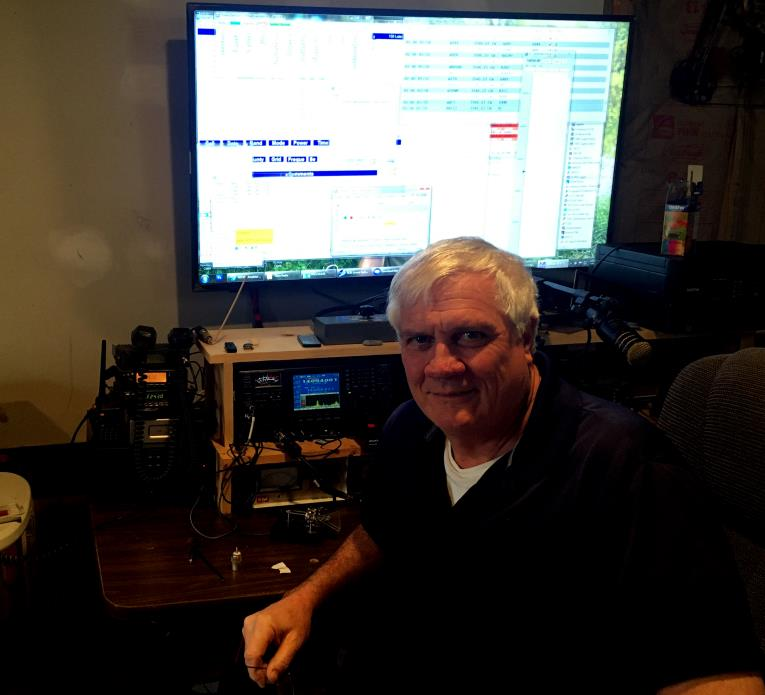 I was introduced to amateur radio at a young age but never got bit by the bug until age 20. My great-uncle, W4KBR, had always wanted someone in the family to pursue their ham license but he never looked beyond those first two generations. I received my Novice license as KA4JMX the year after he became a silent key.

After a few months of listening to cassette tapes, with one letter on each side, I finally had enough confidence to take the code test. Putting the 5 WPM behind me, I pressed on, passing my Extra test in early 1981. That’s a story all in itself.

Over the years I’ve had the opportunity to operate from KY, TN, MS, AZ, CA, NV, TX, OK, PA and KS. Got bit by the contest bug early and have enjoyed the CW and digital aspect of the competitive side of radio.

In 1982, I accepted a job with the FAA as an air traffic controller. Spent a bit over 4 years in Memphis, TN as an enroute controller and with an unexpected opportunity to come back home, finished my career at Standiford ATCT in Louisville, KY. My amateur radio experiences assisted me greatly in my air traffic career.

I was asked to run for and elected to the top spot of the Bullitt ARS in 1987 and have held that position several times over the last 33 years. The club sponsored the first ‘Big Project’ school in Kentucky and my job was as primary instructor. The ‘kids’ accomplished several things over the 12-year run of the program, and several of the students earned their amateur license and/or parlayed their experiences into other career fields.

I ventured into the writing world in the late 80’s as the editor of our club newsletter. We published quarterly. And with consistent help from several club members, we published an informative and excellent newsletter. The Southeast Repeater Association Kentucky coordinators asked me to write the quarterly article for the SERA journal and I was able to do that for a few years. I’ve also had the opportunity to write articles for KYHAM as a regional editor and have a couple of articles published as QST extras on the ARRL website. Not bad for the kid whose high school AP English teacher told him to never waste his time writing.

My wife finally caved and earned her tech license about 11 years ago as KJ4QFK. Two of our children have their general tickets as well. Made sure the boys got their tickets before the CW requirement went away. Now if I can get them to get serious about CW.

I hosted a program on a local AM station for several years. One program was an hour of talk on amateur radio in the classroom with several of the ‘kids’ in the class. We were honored to have Joe WB6ACU call in and share his ham radio stories and experiences with the class. Joe spent the whole hour with us, and we even went 10 minutes over into the next show. This spurred the station manager/owner to pursue his ham ticket.

My current interests in radio focus on CW contesting, casual DXing and digital operating. Until this past year, I had never owned an amplifier but was able to confirm WAS on 10, 15, 20, 40, 80 and 160 m CW. Adding a small solid-state amp this past year has made QSO’s a bit easier, but I still like the barefoot operation. Building antennas has always been a passion. There are 4 towers at the current location, all in various stages of disrepair. My primary rig is the ICOM ProIII with a secondary Kenwood TS480SAT, ALS600 amplifier.

One of my best stories with a CW edge was working at the SDF Tracon in the early 1990’s. We had a remote radio at Clark Co, IN and we began receiving bits and pieces of CW but never enough to make an ID. After a couple of days of this interference, I was finally able to piece together a callsign. Finding a callbook (pre-internet needless to say), I was able to track down the owner of an amateur digi station not too far from the Clark County airport. He checked his equipment and found a failed power supply that placed 28 volts across the input of his radio. Needless to say, he was relieved the radio didn’t fail but advised the radio was almost glowing red, it was so hot. The ability to copy code saved the day.

Several of my close ham friends here in Kentucky invited me to join the CWTs several months ago. All I can say is, what fun, great 60-minute spurts of activity. My thanks to all that sent emails over the past few months offering to sponsor me. Your kudos are well received and appreciated. I look forward to more CWTs and hope to help others learn to love CW and its’ historic connections to the art of radio.