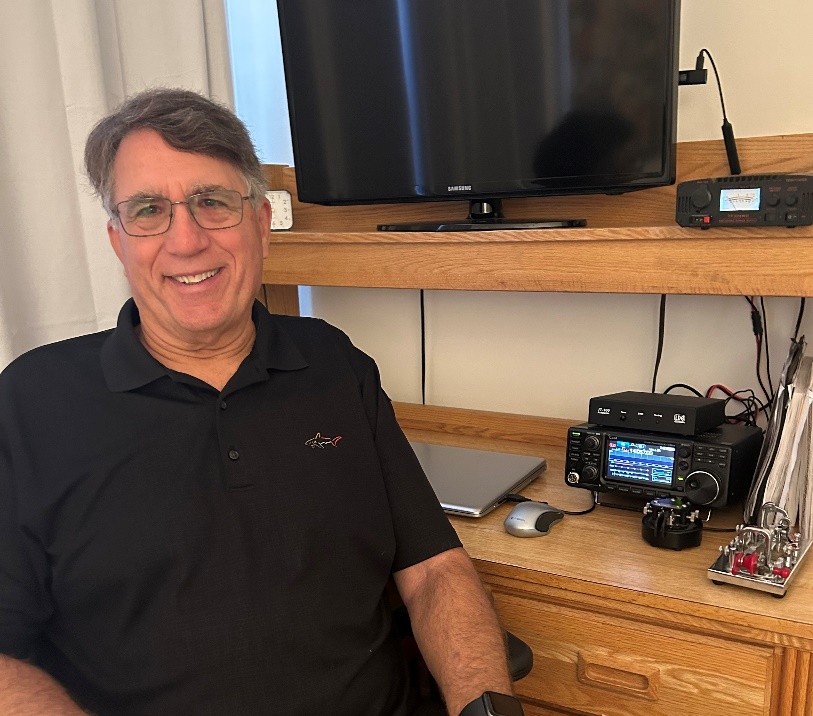 I am honored to have been nominated and sponsored for membership in the CWops Club. Many thanks to my CWA Advisor and nominator, Rob K6RB, and my sponsors, Mike K4RUM, Marv N5AW and Tim N3QE.

I became interested in amateur radio while in high school in New Jersey and got my Novice license in 1966. My Elmer loaned me his Ameco records to learn Morse code and he later administered my Novice exam. My first call sign was WN2TZR and my station was a Heathkit DX-40 and a Gonset receiver. I made many CW QSOs the first few months after getting my ticket. A well-meaning friend loaned me a 2m AM radio (a Heathkit “Tower” i.e., 2er), and though I had a lot of fun, I never got my code speed up to 13 wpm and failed my General exam. After that, I put ham radio on the back burner.

I had dropped out of college and received a letter from my draft board at the end of 1969. I decided to enlist to have some options about my future. An Army recruiter suggested I go to the induction center to take the battery of tests; I could return with those scores and see what schools would be available. Following the tests, I was called out and told my test scores, were very good and I was offered an opportunity to join the Army Security Agency. Because all members of the organization required a security clearance, they could not tell me much about it, but it piqued my interest and I signed up hoping to get one of the electronics repair schools. Once out of basic training, I was sent to school to be a Morse Intercept Operator, not what I was expecting but it turned out to be a good experience

I spent the remainder of my enlistment copying intercepted Morse code messages, and a year in Vietnam where my job was to fly in the back of small, twin-engine planes, and listen for enemy transmitters, which we would then locate by triangulating the signal with the airplane. I remained in the Army until 1973.

I moved to St. Thomas, in the U.S. Virgin Islands in 1975. I met a few hams there and took the Novice exam again around 1978 and became WP2ABR. I got back on the air with a Yeasu 301D and an off center fed dipole. Around that time, you still had to go to an FCC office to take a higher-class license exam. In 1979 I was working as an EMT on St. Thomas and was sent to Seattle, WA for a month for training. While there, I took and passed the General exam. At that time, I was attending The College of the Virgin Islands, studying nursing. I graduated with an RN degree and worked in the local hospital emergency room until I moved to Jacksonville, FL in 1984.

In Jacksonville I changed my call to N4OQV but did very little hamming until around 2017. I got a TS-480 and an EFHW antenna and got back on the air. I passed my Extra exam in 2019 and moved up to an IC-7300 and switched back and forth between CW and digital modes. I was in a rut at about 20 wpm and wanted to increase my speed and improve my head copy, which first brought me to the LICW Club and then to the CWA advance class. My advisor, Rob, K6RB, kept our sessions interesting and challenging and injected a lot of operating and contesting tips, anecdotes and some practical theory and my classmates and I made steady progress throughout the 8 weeks. He encouraged us to spend a lot of time with our homework assignments as well as Morse Runner and RufzXP, but it was all time well spent.

Prior to the CWA I was not interested in contesting. Getting involved with CWTs and contests has changed my perspective. Now I am looking forward to Wednesdays for CWTs and the upcoming Sweepstakes and other contests.

On a personal note, I still live in Jacksonville, I’m married and have a grown son and daughter and 4 grand kids, ages 7 to 1. I went from ER nursing to work for a large medical device manufacturer doing regulatory compliance work. I have been retired since 2016 and enjoy golf and I’m starting to play pickleball. My wife and I traveled quite a bit prior to the pandemic, and we are looking forward to get back on the road again next year. Until a couple of years ago I enjoyed trips on my Harley Davidson cruiser, but health issues prompted me to sell it. I’m active in the Beaches Amateur Radio Society and we help support many community events. I am also a Laurel VEC and administer amateur exams. I am looking forward to meeting more club members on the air in the coming year.