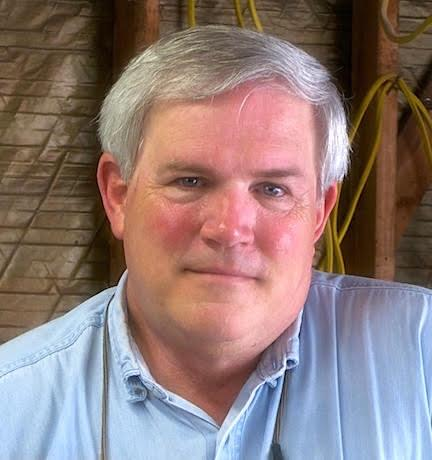 I’d like to thank John, AJ1DM for nominating me, and Tom KB5RF, Bill K3WJV, and Ed N9EP for sponsoring me.

I was first licensed in 1994 as a Technician. My first radio was a Radio Shack HT I used to hit the local repeater. My wife and I had four kids so there wasn’t much (more like zero) in our budget for radios at the time. I remember having lunch with a friend and telling him I was a new ‘HAM’ radio operator. He asked me what kind of gear I was using. After describing my Radio Shack handheld, he invited me to stop by his house after work. He had inherited his childhood home after his mother passed away, and still had his father’s (SK) radios and gear in the basement where his dad had set them up.

The basement was filled with radios and equipment, most of which I had no idea of what it was or did. My friend invited me to borrow whatever I liked and use it for as long as I wanted! Later that evening I went home with an ICOM IC-730 under my arm and a pair of well used Brown Bros. paddles. A month later I passed my 5 wpm code test and got my Tech+ license. My first CW QSO was on May 13th, 1994 on 40m with Matt, N3NTJ.

For the next few years, I didn’t do much with Amateur Radio. My main concerns were growing my business, getting my wife through law school, and kids through college. After our kids were grown, and my wife had settled into her new legal career, I sold my business and retired. I went fishing and played golf. When that got boring, I started building stereo equipment, and when there wasn’t any more room in our house for another pair of audio speakers, I remembered I had an Amateur Radio license.

I didn’t have any gear to speak of at the time, so I started building kits. I finished an Elecraft K1 and I was hooked again! I was surprised at how quickly the code came back to me, but my skills were still a long way from being able to ragchew. The Internet provided new tools for learning the code, which I took advantage of. It didn’t take too long to get up to 8-10 wpm. I was happy operating at that speed for quite a while and was having lots of fun. In the meantime, all kinds of kits had become available, and I tried to build every one of them.

As my interest in radio grew, I got more serious about the code and CW. In 2013 I discovered CW Academy. Even though I already knew the alphabet and numbers, I signed up for a Level 1 course. It was my great fortune to have Bill Sepulveda, K5LN, for my Level I advisor. Bill was very instructive and gave me a new perspective on the code. I completed my CWA Level 1 course in February 2014.

After my Level 1 course, I immersed myself in CW. I was having lots of fun and got on the air as often as possible. The more time I spent on the air, the faster my skills improved. And when I wasn’t operating on the air, I was talking about CW. I talked about Morse code and CW to anyone who would listen, especially young people. I encouraged everyone to get an Amateur Radio license and learn the code.

Living in a large college town provides many opportunities to talk about the code and CW. I was having lots of conversations and it seemed like I was answering the same questions over and over again. So, in 2017 I started the Dit Dit podcast. It’s the only podcast dedicated to Morse code and CW operators. Producing the podcast is a real joy. I hope everyone enjoys listening to it as much as I enjoy producing the show.

Somewhere along the way somebody told me about QRP Fox Hunts. I jumped in and had no idea you could have that much fun with a radio! In a fox hunt there are two ‘foxes’ operating within a predetermined frequency range using 5 watts of power. They send ‘CQ FOX’ and without using any spotting aids, you (the hound) scan the band and hopefully find the fox. If you find the fox, then you compete with other hounds to get the fox’s attention. And if you successfully complete an exchange with the fox, you score a point and get the foxes’ virtual pelt.

A fox hunt is both challenging and fun. I learned to use my radio’s filters and work split. I’m constantly searching for new ways to squeeze more efficiency and performance out of every inch of my wire antennas. I’ve learned about propagation and developed strategies and skills for busting pileups. A couple years ago I was invited to join a Winter Fox Hunt team which made the event even more fun. Thank you Central Illinois QRP Fox Hunt Team; Drew K9CW, Mark WB9HFK, Ed N9EP, and Mike W9QS.

In 2018 I signed up for CW Academy Level 2. I was comfortable operating at 15-18 wpm but wanted to improve. I was placed in Mark Tyler’s, K5GQ, Level 2 course. Mark is an amazing CWA advisor who took me to a whole new level of CW skill and proficiency. With Mark’s help I began to headcopy, started hearing words for the first time, and operated at speeds I never would have tried without his encouragement and advice. When class ended it felt like Mark had strapped me to a CW rocket and lit the fuse. I was headed into new 23+ wpm CW territory and it was great. Thank you, Mark!

In 2019 John, AJ1DM, invited me to be his associate advisor for a Level 2/Intermediate class he was teaching that fall. I jumped at the opportunity, assisted as best I could, and tried to learn as much as possible about being a CWA advisor. Class went well, we had great students, and I was delighted when John asked me to assist him again with his 2020 Winter Intermediate Level course.

I’ve learned a lot of things, met a lot of really nice people, and had loads of fun since I got back into Amateur Radio. I’m looking forward to being an active CWops member and helping others have fun and achieve their CW and ham radio goals.