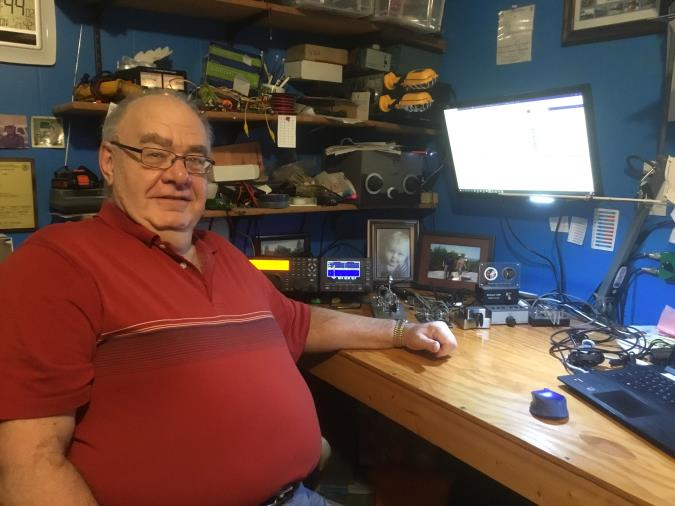 First, I want to thank Bud, AA3B, for nominating me along with Bryan, N3FZ, Mike, N8DNA and Mike, ND9G, for sponsoring me.

Back when I was a little kid, my Great-Grandmother had an old, very large radio that had some shortwave bands on it. I would tune the bands, listening to foreign broadcast stations and Amateur AM stations. I could also hear Morse code when the signals would mix together.

I was always interested in radio and electronics. After high school, I enlisted in the U.S. Navy where I went to Aviation Electronics A (AVA) School in 1970 in Tennessee. I was then stationed at Naval Air Station (NAS) Quonset Point, RI, where I met John, WA3IMI (SK). John gave me my Novice exam in 1972 and I received the call WN3TXI. My first station was a Knightkit T-60 transmitter and a Heathkit HR-10B, which I built. I still have the Heathkit, but I do not recall what happened to the transmitter. After four years in the Navy, I went to work as an electronic technician for a large manufacturing company machine shop. I repaired machine tools, Numerical Controlled (NC) and Computerized Numerical Controlled, (CNC), and even changed a light bulb or two. Shortly after my time in the Navy, I took the General Test in Buffalo, NY, followed by the Advanced test six months later. Many years ago, I passed the Second Class Radio Telephone Operator test and I will say it was the hardest test I ever took.

I have always enjoyed CW and have made very few phone contacts over the years. I remember one time during the PAQSO test, I started on phone. After many attempts to get things going on phone, I switched to CW and never looked back. People could actually hear me on CW but not so much on phone. My radio was a HW-101 which I built at that time. A few years later, I got a Kenwood TS-440SAT and made many, many QSO with that radio. In 1985, I wanted to get the Amateur Extra License, so every night I listened to W1AW at 35, 30, and 25 WPM. I went from an acceptable 15-18 WPM to a solid 25 WPM. I took the Extra Test and passed. Today my station consists of an Elecraft K3 with three wire antennas. My main antenna is an extended Double Zepp about 200 feet long on each side and about 50 feet high, fed with 450 window line and a Johnson Matchbox. And another dipole fed with 300-ohm line about 100 feet long. Also, an inverted “L” for 160 m with over 1 mile of radials. I have nine band DXCC CW all with 100 watts and these antennas.

I also enjoy QRP in the field. I have DXCC from my car using my mobile antenna and five watts of CW. I have an Elecraft KX3 and several other QRP rigs. I need two more DXCC Entities to get on the DXCC Honor Roll, just need some sunspots!

I am a member of the McKean County and Potter County Amateur Radio Clubs in Pennsylvania. And the North Coast Contesters and Newport County ARC in RI. Also, SKCC. I feel very honored now to be a member of CWops. In 2016, I retired from the McKean County Emergency Management Agency, where I was the director. I spent 11 years there after leaving my factory job of 32 years. I am retried now, or at least I am supposed to be. I still work for the County EMA part time, also at the State Fire Academy as an Adjunct Instructor, and I am teaching Electronics at the Career and Technical Center. I also teach Amateur Radio courses. I teach 30-hour Technician, 36-hour General, and 36-hour Amateur Extra courses. We cover not only the questions but do lots of hands on and demonstrations.

I am married to my very wonderful and supportive wife Peggy of 46 years; we have two children and two grandchildren. I also have an Amateur Radio license in Belgium, ON9CLW, as my son lives in Belgium. I have operated from Belgium, Germany, and France. I have had the honor of meeting John, ON4UN, and Mark, ON4WW. Operating from ON4UN Station was a great memory. I look forward to many good and long QSOs with fellow CWops. I do enjoy contesting, but a nice long rag-chew is great.