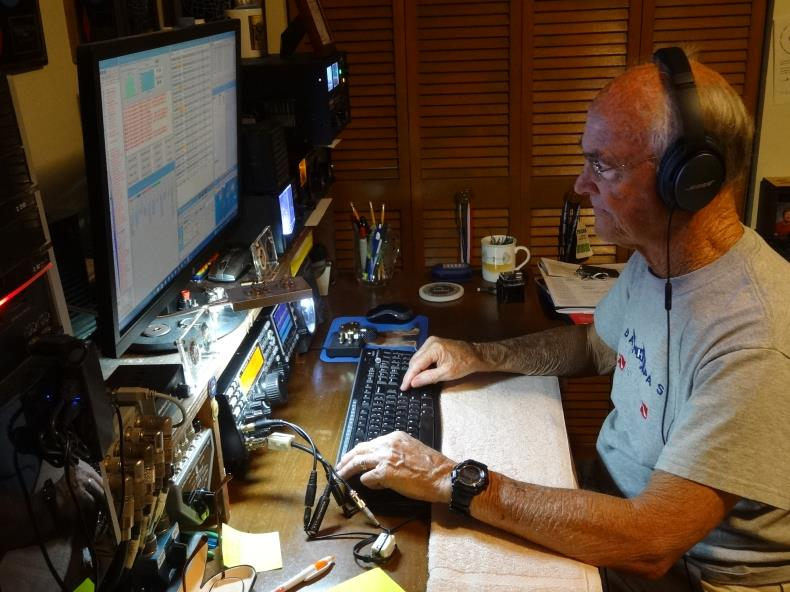 Electricity and radios got me into a lot of trouble during my pre-teen years. My father was a private pilot and had an aircraft radio in his upstairs office at home. I had fun playing with that radio, but somehow managed to connect the 45 volt “B” battery across the 1.5-volt filament line. It took several weeks of my paper route proceeds to pay for that escapade. As a pilot, my Dad was friends with the local crop duster, Les Holmes, who also happened to be W1VFY. To channel my curiosity into less destructive areas, he arranged for me to meet with Mr. Holmes at his house in Pinehurst, MA. Les got me hooked on the prospect of getting a license and tutored me in theory and operating. While these weekly meetings went on, my mother taught me Morse code. She never learned it herself but was able to tap out messages to me using a sheet of paper with the dots and dashes for each letter and number as her guide. Eventually I got my speed up to the required 5 WPM and Les administered the Novice exam at his house. Not long after in June of 1955, I received my non-renewable one-year license as WN1GIV. While the code and theory study were going on, I built a 6AG7/6L6 MOPA and put together a Heathkit AR-2 receiver. I strung a wire from the roof of our house to the barn in the back yard about 120 feet away and was ready when the Novice ticket arrived. The homebrew transmitter was single band 80 m and I never discovered any other band during my Novice term. While still in high school, I took a fifty-mile train ride to Boston and passed the General exam at the old Federal Building, which was walking distance from the train station. My station was upgraded to a WRL Globe Chief, Heathkit VF-1 VFO, and Hallicrafters S-53A receiver.

In 1961, I was out of work, newly married, and pretty much broke. Somehow, I managed to get a job interview with the Vice President in charge of engineering at WWLP-TV in Springfield, MA. George Townsend hired me with my only credentials being my ham license, but with the requirement that I obtain a First Class Radiotelephone license within a year or I would be out the door. I breezed through the First and as a bonus passed the Amateur Extra exam. I finally set up my first “real” ham station, a Yaesu FT-101B, chimney mounted homebrew 3el 10 m Yagi, and 40/80 vertical with relay switching of base loading coil taps. In 1967 following an earlier job interview, I was offered an engineering position at WLBW-TV in Miami (later to be bought by Washington Post and become WPLG-TV). We bought a small three bedroom, two-bath house in Miramar for $18K and I confiscated one of the bedrooms for my ham shack. I put up my first tower complete with tri-band Yagi, obtained a Heathkit Chippewa amplifier from a co-worker at the TV station, and got deeper into contesting. For the low bands, I had a 40 m quarter wave vertical with Hustler 80 m “Super” resonator atop. This was to be my ham station for the next twenty-five years, certainly not a competitive station, but enough to heighten my interest in contesting. It did earn my 5BWAS and 5BDXCC shortly after those awards were made available. In 1989, I sold the Miramar house and bought a three-bedroom home in Plantation on 1/3 acre of land and – important – with a vacant full acre parcel adjoining our back yard. I attribute that vacant lot for assisting any contest successes over the next several years. It provided the space I needed to string out a 110-foot 40/80 trap dipole as well as the horizontal portion of a 160 m inverted-L. My 65 feet of Rohn 25 tower has survived several hurricanes and at present supports a Cushcraft A4S tribander at 65 feet with an A505S 5el 6 m beam five feet above it. The 40/80 coax trap dipole (with my homebrew “Sewper Armadillo” traps) is supported at 62 feet on a tower crossarm. The other side of that crossarm supports the 160 m inverted-L with 80 feet of wire stretched out over the vacant lot. The current station consists of an Elecraft K3, P3 panadaptor and a KPA1500 amp.

In contesting, I’ve done a number of CW Sweepstakes from NP2B and quite a few ARRL DXCW and CQWW DXCW contests as C6AKQ. I’ve also operated briefly from VP9 and ZF2.

I feel honored to be accepted into the CWops and I thank N3JT for nominating me and several members for sponsoring me.