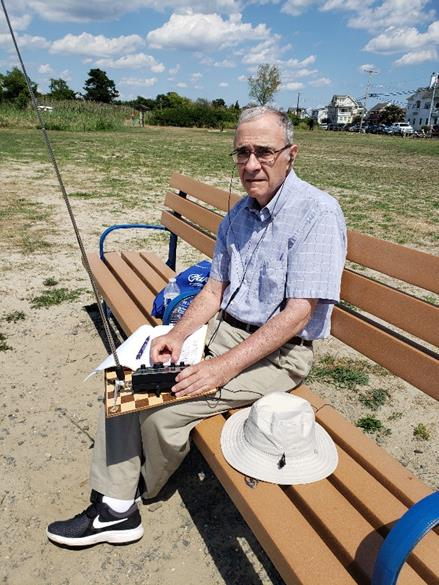 My interest in ham radio began when I received a gift of a crystal radio kit in the late 1950s. Listening to a radio that I built inspired me to learn more about ham radio. Growing up I often read QST Magazine in the library but I did not have an opportunity to become a ham because of the typical reasons cited: lack of an Elmer, lack of financial resources and fear of asking my mother if it was okay to drill a hole in the house for an antenna.

A couple of years before I retired I was looking for a hobby to occupy my free time. Ham radio seemed to be a good fit. I got my Tech license in 2013, followed in rapid succession by my General license and Extra license.

I joined a radio club and got HF operating experience at the club’s shack. My first HF rig was a 50 watt Ten-Tec Argosy 525D. The 10m band was wide open at that time and I became hooked on ham radio. Six months later I purchased a Ten-Tec Eagle and I enjoyed working DX and contesting. I mostly operated SSB and all the digital modes earning WAS, DX100 and Worked All Continents.

The lure of working distant stations using low power drew me to CW. I tried teaching myself Morse code using online CW apps but I did not have much success. I read about the CWops CW Academy and enrolled in the Level 1 training class in fall of 2017. CWops requires that you use a paddle so I bought a Vibroplex Standard Iambic key which I still have. The training was great. I got on the air using CW and participated in the weekly CWTs before I finished the course. To improve my head copying ability and sending speed I enrolled in the CWops Level 2 training. I attended the Winter 2019 class. It was time well spent. Operating CW opened up a new world for me. I was able to make very long distance contacts with 100 watts and my compromised antennas.

My favorite radio activity is the CWTs. They are one hour of pure fun. Each week I try to increase my score.

In 2020 I purchased a Begali key and the day it arrived news broke that Covid-19 was raging in the Italian province where the Begali factory is situated. At that time the health experts were warning us that the virus could live on inanimate objects for up to two weeks so the box sat in my garage until it was “safe” to use. It was a long two weeks!

My next challenge was to become proficient operating QRP. I joined NAQCC and participated in their Sprints. I love the NAQCC Word Challenges because they motivate me to get on the air and operate QRP.

Recently I began activating Parks On the Air. I operate QRP CW from my car using a KX2 with KX2PD paddles. My antenna is a trunk lip mounted Wolf River coil with a 118” whip.

Current gear in my shack are an IC-7300 and a Begali Magnetic Classic key. I have a stealth tripod mounted vertical antenna with a counterpoise on my deck. I use a Wolf River Mini for the low bands.

I retired from Merrill Lynch Bank of America in 2015 where I was a Six Sigma Master Black Belt and a senior software development manager. Before my finance career I was a research chemist at Hoffmann-LaRoche. I am an avid birder and share this hobby with my significant other Christine, KD2EOZ. Chris is a great help with all of my antenna projects. We also enjoy providing radio support for community events like the NJ Triathlon, March Of Dimes Races, JOTA and BSA Radio Merit Badge training. I am a VE and teach Ham Cram at the Trenton Computer Festival.

I hope to hear you on the air. Please give me a call if you hear me doing a POTA activation. I will be activating many New Jersey parks this year.