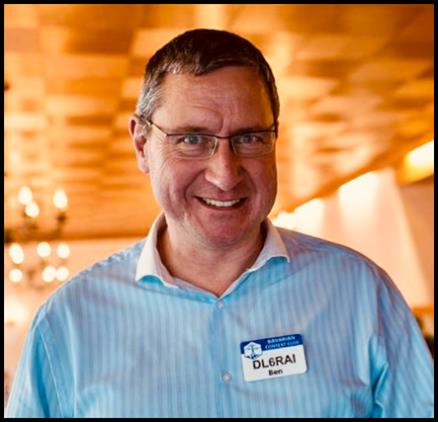 One day, as a SWL, I had listened to DL9LD, “Luck”, a local ham (now sk) – who I did not know personally at this time. I was fascinated by the way he communicated with the world using CW – and so I wanted to learn it too.

But I had a hard time learning the code since I knew no hams at all. I had got hold of DL3VD’s book Morselehrgang , built a sound generator and then recorded my own CW lessons on a tape recorder using a Morse key I had bought at a flea market. Initially I felt, I’d never learn it – but finally I managed the 12 wpm to pass the exam in April 1980.

Having tuned the HF bands as a SWL for a couple of years, I knew about DXCC and looked for new countries every day. Working ZL2MM on the other side of the globe one early morning in September 1980 on 15m CW from my modest station at home was a highlight I still remember today.

In 1981, while on a student exchange program, I had the opportunity to operate from the other end of a pile-up as GU5EAH from GU4EON’s home – what a blast! Many activities followed, the most exotic one from Turkoman, when I took the chance to visit Victor, UH8EA (now N8OO) for CQWW Phone 1991 with a group from the Bavarian Contest Club (BCC).

In the 1990s I travelled to several Mediterranean islands with my friend Wolfgang, DL5MAE. Usually we would load up his Mercedes-Benz with HF and VHF equipment and antennas and headed south, visiting SV9, IS0, 9H, SV5, CT3 and 1A0. In 1997 I travelled to ZB2 and EA9 with Peter, DL2NBU.

In the late 1990s I joined Franta, DJ0ZY, developing and maintaining a Packet Cluster like software package called CLX, which became quite popular for a while. We closed down in 2003, when other DX Cluster software had become available.

The BCC organized a major project to break world records in the Multi-Multi category of the CQWW Contest in 1999 and 2000. My job was to set up the computer network – back then with K1EA’s CT software on MS-DOS. Indeed, we achieved our goal both on SSB and CW. The SSB record from 1999 still stands today – 21 years later.

Between 2002 and 2005 I was the WAE DC Contest Manager. We spent lots of time converting and fixing logs, since our policy back then was to accept any electronic log format. At that time, I was also a member of the CQWW Contest Committee lead by Bob, K3EST. Between 2007 and 2019 I was president of the BCC, one of the most successful contest clubs world-wide.

In 2014 an opportunity opened up to buy property in Aruba from Carl Cook, AI6V (now sk). Since then you can hear me somewhat irregularly signing P4/DL6RAI.

Next, I was heavily involved in the organisation of WRTC2018. My task was to provide “black boxes” for collecting online scores of all participants. We designed and built 70 RF-proof devices equipped with a Raspberry minicomputer and a GSM module to continuously report live scores during the event.

My typical operation of today takes place from my home using 100 watts and a 2 x 13m open-wire fed dipole on all bands. Living in the countryside, I enjoy the luxury of almost no man-made noise. You can find me in most major contests, particularly on CW, RTTY and Digi modes. In 2020 I made around 17,000 QSOs and worked 183 DXCCs. My current DXCC total is 350, missing only P5, North Korea. Over the years I collected several premium awards like 5BDXCC, 5BWAZ and WAZ 160.

By the way, all of my home and expedition QSOs are on LoTW and Clublog. I am pretty sure, that many of you are already in my logs of the past 40+ years. So, I am looking forward to our next QSO!

Thanks to Sven, DJ4MX, who supported my nomination!