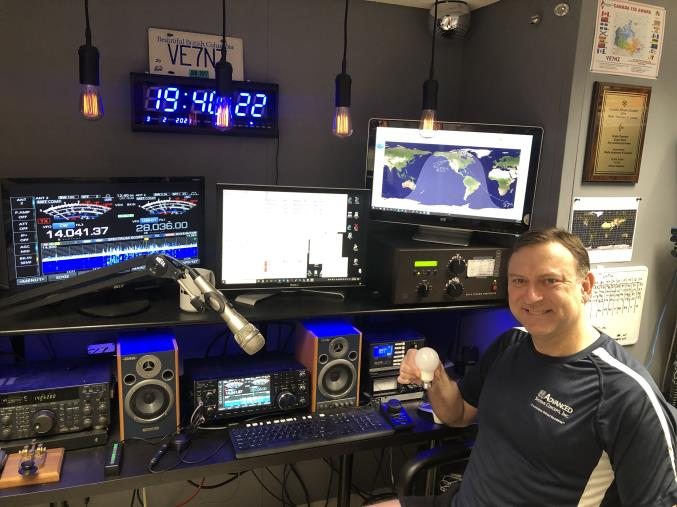 Thank you to Keith, VE7KW for sponsoring me. It is an honour to be part of CWops.

Why am I holding a light bulb? Well, my Morse code experience started with light, not sound. At nine years old I wired up two light bulbs with push button switches so my brother and I could sit on either side of our bedroom door and practice sending messages to each other. Don’t be impressed that I was nine, my brother was six!

We built on our success by setting up a light on our house and our friend’s across the street so we could send messages between us. This was followed by a RadioShack key and practice oscillator, then a Heathkit iambic keyer, and, at age 15, passing the 10 wpm requirement for the Canadian “Basic” Amateur Radio licence. After a year of operating CW on HF with a Heathkit DX60B (using a light bulb again – for tuning to maximum brightness, a questionable idea now I think about it) I passed the Advanced test at 15 wpm. Despite this giving me full HF voice privileges, CW remains my passion.

While I now have an IC-7610, my main radio for the last 25 years was a Kenwood TS-870 which I bought on the recommendation of an engineer who said it was the best CW radio on the market. Today I can switch between the radios and have yet to find a weak CW signal that the 7610 can hear that that 870 can’t!

I am excited to see the work the CW Academy is doing to promote CW. One can play music on many instruments, CW just happens to be one we enjoy. And that joy is hard to describe to others, but when you are up late at night in a warm, low lit ham shack pulling information out of the noise, it’s almost romantic. My wife has a different view, but that’s ok, I just reply dah-dah-dah-dit-dit twice.