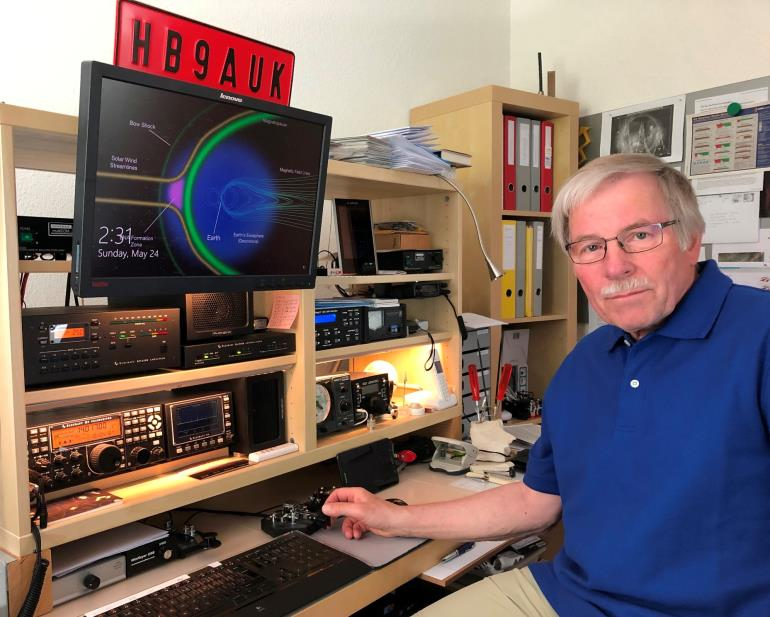 I grew up in a small village in the German part of North-Western Switzerland. When in grade seven at school in 1961, my math teacher offered that I get involved in an extra curriculum project for the construction of a large, visualizing chess board display, where 64 stepper motors were to be controlled by an entire rack of mechanical relays from a decommissioned telephone switching center. Thus, my first introduction to Boolean algebra was complemented with extensive use of a soldering iron! This experience, along with a set of surplus handsets and a do-it-yourself schematic inspired me and my school pal to build two telephone stations and connect them by stringing wires between the roof tops of our neighboring houses. It was not long afterwards, that crystal (whisker) and diode detectors were acquired, and later enhanced with transistor audio amplifiers. To be able to buy a transistor in the early 1960’s required many rounds of paper delivery tours!

Ham radio came into my view while reading SOS at Midnight by Walker A. Tompkins, during my last year at secondary school. This was the year, where pivotal decisions had to be made about one’s further education and professional interest. For me this was an easy choice, when offered an apprenticeship as Radio Electrician, a then federally certified vocational four-year program. During these formative years I joined both the local radio club and USKA (Union of Swiss Shortwave Amateurs) and qualified for my first ham radio license to operate on 144 MHz and bands above. Mandatory training and extended service time in the military delayed my Morse code proficiency test until 1972, after which I was assigned the call HB9AUK.

The quote, attributed to Albert Einstein, “… the more I learn, the more I realize how much I don’t know …” could serve as a maxim for my desire to pursue further studies in electrical engineering. After graduating from an applied engineering college and having worked as a digital logic design engineer, I immigrated to Canada in 1974, where the University of Toronto became my work and study place for the next six years. After passing the VE3 license test and becoming a member of the University’s ham radio club (VE3UOT), I spent countless hours on the HF bands operating the club’s superb S-Line by Collins, with the TX driving a Heathkit SB-220 amp connected to either a TH6-DXX Yagi or a dipole antenna. On my first day on the job as a teaching assistant in the electrical engineering department, I was introduced to Mike, VE3GFN, who subsequently became a lifelong friend and mentor for all things concerning CW, and more recently contesting.

After returning to Switzerland in 1980, I worked for nearly 30 years at an international computer company’s research lab, where I also completed my PhD dissertation. Today, both my wife Ann (HB9ZGO), who has family roots in Pennsylvania (thus my US call AA3QF), and myself enjoy our retirement in a small village in Northern Switzerland.