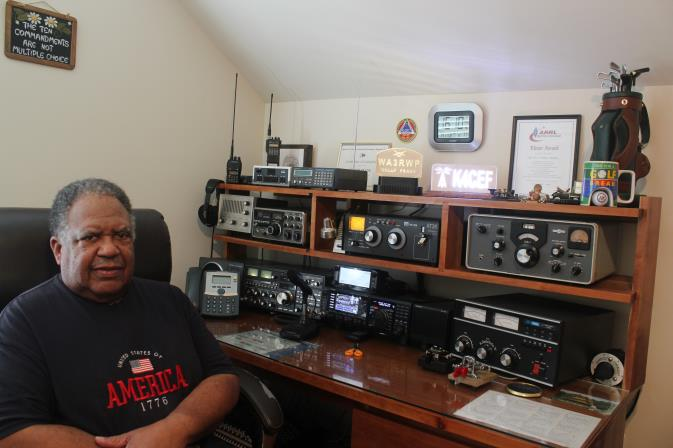 I obtained my Novice license, WN2OVV, in 1964 at the age of 15 while living in New York City. I lived in city housing, or better known as “The Projects” where the only outside antennas allowed were special small TV antennas designed to be mounted to the metal window frame. Since rabbit ears don’t resonant very well on HF, I wrote a letter to Robert Wagner, the Mayor of New York City, and obtained permission to install a HyGain 18V vertical antenna out of my window on the 17th floor. The 18 foot antenna worked very well on 40-10 meters with my 90 watt Eico 720 CW transmitter and Lafayette HE80 receiver.

In 1969 I entered the United States Marine Corps where I held the MOS of 2531, Field Radio Operator. I volunteered many hours at the Military Affiliate Radio Station (MARS) on base handling message traffic and providing phone patches for Navy and Marine Corps personnel. The day before I was scheduled to ship out to Viet Nam I was reassigned to permanent duty at the MARS station in which I had been volunteering. That was a true blessing.

Upon discharge from the USMC I accepted a position with the Department of Defense in Maryland. After 40 exciting and rewarding years I retired as a Senior Engineering Specialist in 2007. In Maryland I became WA3RWP. I had a 55 ft. tower with a Tribander Yagi, 40 m inverted V, 10 element 2 m Yagi and a 2 m vertical. The HF rig was a Yaesu FT980 and Drake L7 linear amplifier. I operated HF CW, SSB, RTTY, and 2 m/10 m amateur satellites.

My 2 m activity put me in touch with Bob Bruninga WB4APR (SK), the creator of the Automatic Packet Reporting System (APRS). The Army Navy football game is a long time tradition. During the development of APRS I and several other hams assisted Bob in using APRS to track the game “trophy”, a football being carried by multiple runners from the Naval Academy in Annapolis, MD to the Army Stadium in West Point, NY. Little did we know that APRS would one day be used around the world.

I’m a member of the Williamsburg Area Amateur Radio Club (www.K4RC.net) and serve as its training coordinator. Our classes have resulted in more than 45 new hams and General class upgrades.