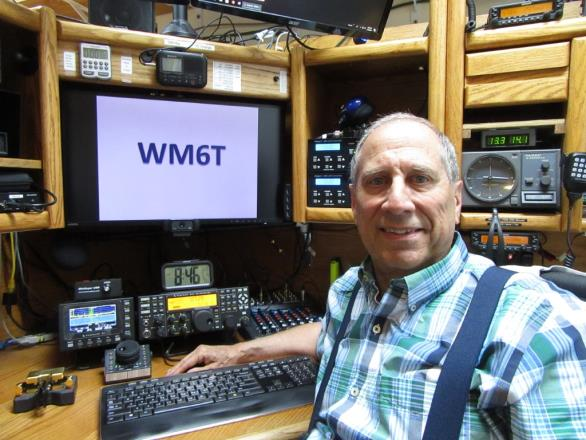 I want to thanks my CWA advisors for the programs they guided me through. First was Tim Smith, W7EEE and for the last two classes it was Buz Tarlow, AC6AC. Their dedication to their students has been nothing short of amazing. And I wish to thank to AC6AC who nominated me for CWops and to my sponsors, N4PDM, AI3A and WT8P.

I was first licensed in 1959 at the age of 14 but only became seriously active in 1995 while volunteering with my YL, Jodi, WA6JL, for the San Bernardino National Forest to work in fire lookouts and patrolling forest service trails for the USFS.

I received my new call sign WM6T after having WA6ERA for many years.

My current ham shack radio is a K4D. I have a K3S which is both a backup radio used in our RV. My antennas are a Carolina Windom (40-10), an EF Random (80-10) and a SteppIR DB-11 (20-6) on an Aluma Tower up about 35 feet mounted on our top deck. The motorhome has portable HF antennas including an Eagle-One when parked and an extending mast for dipoles and doing POTA.

In 2005 I volunteered with the San Bernardino County Fire Office of Emergency Services (OES) as part of the Emergency Communications Services or ECS. I served as the Mountain Division Chief for ECS from 2009 to 2017. ECS is a first responder for any incidents providing communications at the Incident Command Post (ICP) and Fire Camps such as for the major forest fires in 2003, 2007 and 2016 as well as some lesser fires and two recent major isolating snow storms. I am a member of our local ARES, CERT Team, California Disaster Corps, and a Skywarn Spotter. I also organize communication teams for public events such as the Amgen Tour of California, Baker to Vegas and about another 10 large events each year.

Besides considerable DHS and FEMA training as well as wildland fire training I am also a COML and a licensed civil engineer and surveyor in the state of California, where I preform Earthquake Disaster and Damage Assessment for CalOES.

I currently serve as the POTA mapping manager for California and I am one of the operators on the Route 66 On The Air contest as W6C.

I work some contests, enjoy HF, VHF/UHF as well as digital modes PSK-31, FT8/4, APRS and WSPR. Relearning CW has been a lot of fun making contacts after taking that amazing course with CW Academy.