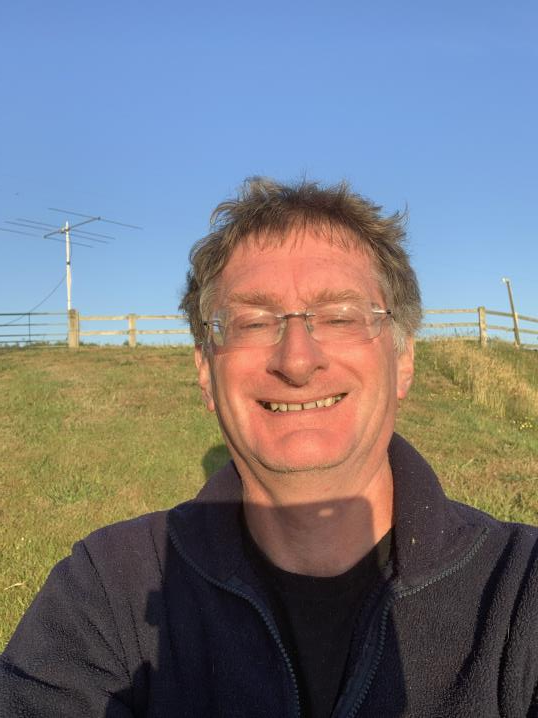 I was born in 1963 and was first licenced as G6TTU, at the time a VHF only call, in 1983. I’d been both a broadcast bands and amateur bands SWL before that, so I knew a little of what I was getting into. Later in 1983 I passed my 12 wpm Morse test and became G4VXE. Having fairly small antennas, I quickly cottoned onto the fact that I’d do better on CW than I would on phone!

Over the years though, I’ve been involved in many branches of the hobby from HF to VHF/UHF/SHF; from CW to data modes and from ragchewing to contesting.

In the late 1980s I was part of the Square Bashers DXpedition Group which made VHF/UHF expeditions around the UK as well as to Gibraltar, Madeira and Malta.

I spent some time in Canada in the late 1990s and operated as VE3/G4VXE – sometimes from the super-station of John, VE3EJ. In the UK I operated many, many contests from South Wales from the home of my great friends Roger and Sue Ward, GW5NF. I was lucky enough to be part of the FSDXA expeditions to Comoros (D68C) and Rodrigues (3B9C).

Over the last ten years or so, my HF activity dropped to almost zero – where we lived which had started off with a quiet noise level but became noisier and noisier. I concentrated on VHF, mostly 6m and 2m, predominantly data modes.

At the end of 2018, I was able to escape what was a well-paid, but ultimately unsatisfying role in Corporate IT, to what my wife, Julie and I term a ‘free range’ lifestyle. I am lucky enough to write for a number of the UK radio magazines, including a regular VHF/UHF column, features and reviews of new (mostly VHF/UHF) equipment. Julie, or Reverend Julie, is an Interfaith minister and a published poet – with a book of her work coming out shortly. At the end of 2019, we left Oxfordshire in Southern England to move to a former farm, on the west coast of Wales, near the ferry port of Fishguard Harbour where we have plenty of space to grow our own food – and plant aerials!

Although the VHF/UHF bands are fascinating from here, with some exceptional paths being possible at times (I have worked Cape Verde on 2m, some 4300km away and the Canary Islands on 70cm both using 50W of FT8 and a vertical antenna), I decided that I would also like to get back on HF CW. With the space available, it seemed silly not to. With dipoles up and a vertical, I quickly found the Wednesday CWTs and enjoyed making a few contacts with friends both old and new.

Outside radio, I’m deeply interested in the ancient landscape here in Wales, photography, walking, astronomy and so it goes on…

Thank you to Stew GW0ETF for nominating me and to Abdel M0NPT, Nigel G3TXF and Don G3XTT for their sponsorship. I’m looking forward to many years of enjoyable CWops activity.