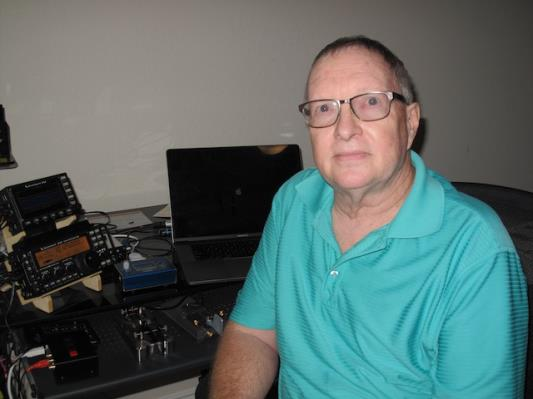 I am honored to be a member of CWops. My dad was an electrician and telephone technician stationed in India during WWII. He learned CW in the Army and used it while enlisted. Dad bought a couple of toy, wired practice keys for us and we spent many winter nights in our Iowa farmhouse conversing using CW. We moved to town and opened a hardware store and I never thought about CW until about 4 years ago.

I spent many years as a musician traveling the country and eventually settled in Los Angeles. I worked as a composer doing scores for film and television. Electronic music was becoming digital in the 80’s and I took an interest in electronics and taught myself computer programming. As time went on, I took a greater interest in computer technology in general.

I relocated near San Antonio in the early 90’s and transitioned into technology work. I worked on mainframes, mid-range and PCs in about all facets. I took a job as a technical consultant in 2000 that required 100% travel. I spent 20 years in that job eventually moving into cyber-security as a focus.

In 2016, I decided to get an HT and get on the air. Got my tech and followed that with my General. Remembering those times with my Dad doing CW, I decided to re-learn it. I looked for training and CWops Academy was highly rated. Doug, VE3MV, was my level 1 advisor. Class was fun but required a lot of breaking bad habits. Enrolled in Level 2 and Joe, KK5NA, was my advisor. We lost some people in that class and it ended up with George, W0PHX, and I in the class. We got extensive sending and receiving time with very focused instruction. George and I became good friends and practice buddies. We met multiple times a week for 30 minutes on our own and practiced sending and receiving, moving from simple words to eventually chatting about work, family and etc. What a great experience! I had to wait about 6 months to get into the Level 3 class and it was also with KK5NA. That class was fun but challenging.

George, W0PHX, introduced me to park activations. That is my favorite CW activity and I try to get out at least a couple of times a month. In October, I will be operating as special event station K5G for the “Get Your Park On! activity sponsored by WWFF, to celebrate Earth Science Week and bring attention to our parks and natural resources. See my QRZ page for schedule!

I am now retired and spending much more time enjoying ham radio, especially CW. Thanks to my nomination supporters and all the Ops who have helped me along the way. Once I get settled into my new retired lifestyle, I would like to start giving back to help others as I have been helped.