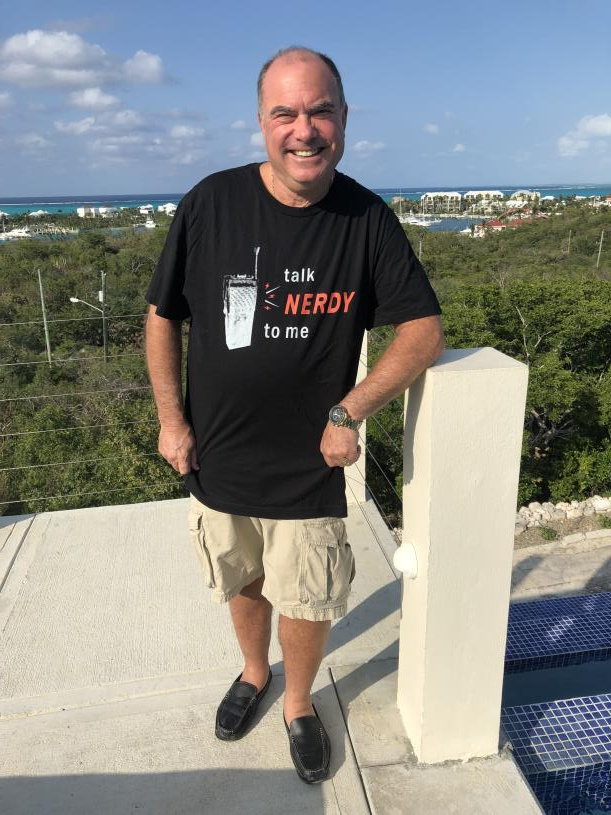 First, thanks to my sponsor and CW OPS Academy teacher Buz, AC6AC and Assistant Instructor Tamara VA7ETR. Their mentorship and support I am eternally grateful for. Also, many thanks to my fellow classmates who all worked together and encouraged each other to succeed. The Academy is a great tool and I highly recommend it to even experienced ops who wish to improve their CW. I am looking forward to participating and hope to help others.

I have been all over the map in ham radio. My beginnings are kind of an interesting story. In October of 1962, the east coast had a devastating Nor’easter. The US Coast Guard sent the lightship Barnegat (LV-79) up the Hudson River and anchored off Spuyten Duyvil, about 5 miles north of the GW Bridge, in the Bronx, to escape the storm. We lived on the 11th floor of a 12-story apartment building overlooking the river with a magnificent view.

So here I am as an 11year old fascinated with this ship. My dad had been a commander in the US Navy during WWII and got the brainy idea that we should communicate with the ship with a flashlight. He was not a ham but was of course proficient in Morse code from the Navy. He knew they would answer and indeed they did, with one of those large shutter type signal lights. Blinding even at a mile. My dad wrote down what I should send with the push button flashlight and a 2-hour QSO ensued. I sent, he copied. Probably less than 5 WPM. Wow! This went on for several evenings until one morning the ship was gone. Back to its post off of Barnegat Light, NJ, lighting the way for ships heading for New York Harbor as it had done since 1924. The ship was decommissioned in 1967.

Come the holidays and under the tree for me was a Heathkit GR-91 receiver kit. We built it and it worked! The resistors, the capacitors, the color codes, the coils. The bug bit me. I listened to shortwave and aircraft and hmm, some guys talking back and forth to each other. Hams! My dad found me an Elmer, Dave, K2AGZ (SK). He was the official White House Pianist and song writer for Bobby Vinton. I didn’t know that then. He was just Dave, my mentor. I got my novice ticket, WN2UIG which was good for 1 year. I built an Ameco AC-1 and was on the air with a long wire hanging out the 11th story window. I made 1 contact …… in a year. In 1965 via the school radio club, I studied for and passed the Technician test at the FCC in downtown Manhattan. An intimidating experience. I became an avid VHFer and 44 elements on top of our 12-story apartment building wasn’t too shabby, mostly on AM! I upgraded to General the following year. Off to Lafayette College in 1969 to study Electrical Engineering. Got additional station license WA3VJJ and set up a station in my rental house off campus. Drake Twins. W3YR was the college station which has since disappeared and by sheer coincidence my fellow CWA classmate Ted, has the call. I couldn’t believe he has it and that the college station ever gave it up. Great call Ted!

Well I got the EE degree but off to Dental School and Philly! I upgraded to Amateur Extra and got the call AK3M. I tried to time it perfectly to get KA3A, but I went a couple of weeks too early. I never liked the AK3M call. Two meter FM was huge in the early 70s and it wasn’t long before myself and some buds put up the first repeater in Delaware County on 147.360. It was a big hit and it’s still on the air. I put up several more on 2m and 70cm and improved and maintained them for over 20 years. Vanity calls became available and I grabbed K3HR (Harold Ross Lambert is my name) which I loved and held until I moved to NJ in 2016. DX, RTTY, PSK, contesting, packet, moonbounce, satellite, meteor scatter, DMR, Fusion, D-Star. I love it all. What a hobby! No lack of stuff to keep you interested. I am active on 6m MSK so look for me!

I moved to Long Beach Island, New Jersey in 2016. Oddly enough just 3 miles from Barnegat Light Coast Guard Station where the lightship was based. I’m old fashioned and I never liked it when the FCC changed the rules so that you could hold a call not from your district. I got tired of explaining my K3HR call when I was in NJ. W2TT became available and I grabbed it. Good for CW indeed.

As I have gotten older the contests just seem to be more and more fun and I have been bitten by the CW bug (or paddle). Of course, I had to do 20wpm for the Extra, but I never was a rag chewer on CW so didn’t use it much. Just for contesting really.

We hung out regularly when we lived in Pennsylvania. We started DX-Cationing together in 2016. We have been VP5P for CQWW WPX SSB and have won North America twice. (See VP5P.com.) While we are there and when the contest is not on John is always busy on CW. It fascinates me and I knew I had to learn to do better. Then when John performed at the CWops booth at Orlando last year I decided I had to go for it. How does he do it? I started my classes in September with the CWA and it all came back quickly. It’s all about the practice folks. I’ll never catch John though!

I’ll be a regular on CWT and look forward to giving back to the organization.