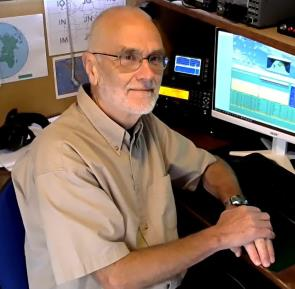 Licensed since 1986 though I was a very keen swl during the ’60s while at school. I’d be an old-timer GW3 by now if university, climbing, and the 1970s habit of growing hair and a beard and bumming around the world in ragged jeans hadn’t taken over; still got the beard but the hair’s on it’s way out now. The purchase of a first cottage in the hills of north Wales in 1981 and a chance discovery that Ken McCoy GW8CMY was a close neighbour re-kindled my curiosity in the magic of short waves.

Interests are mainly HF CW and CW contesting (Since 2013 I have held the short contest call of GW4J). Have a modest setup with an early Elecraft K3 (# 145) and a Gemini HF-1k amplifier, plus K2 #3735. Antennas are wire only except for a Moxon fixed on North America and I’m lucky being able to put up temporary antennas for specific contests in an adjacent field using various fibre glass poles, courtesy of a friendly neighbouring sheep farmer. Log with Logger32 and N1MM+ or more recently Dxlog for contesting and use a Microham CW Keyer which keeps the computer sent cw smooth while contesting (unlike, at times, my hand sent cw…….!).

I’m a lifetime member of the local Dragon Amateur Radio Club and a member of both the RSGB and ARRL. I’m also member #919 of CWops (www.cwops.org) and the club ‘Ambassador’ for North-West Europe; I have been an advisor in the CWAcademy morse training program and can be found each Tuesday at 1900 local time on 40m and/or 80m CQing at <20wpm for students and any other learners wanting some live qso experience. I was honoured to be installed as President of CWops from January 1st  2021.