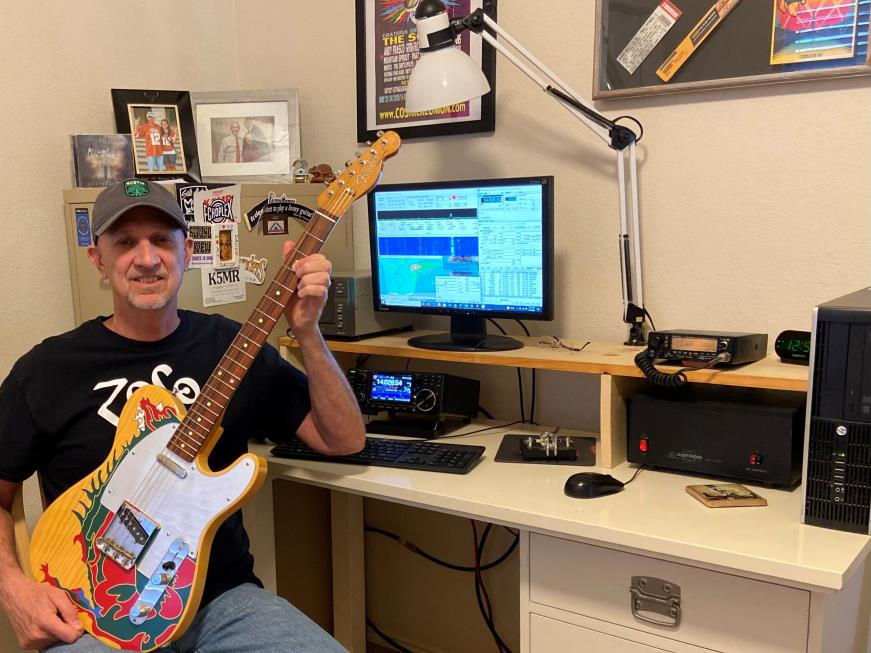 Thank you to my lifelong friends K6NR, N5RZ and N5TJ for nominating and sponsoring me and to K6RB who was also kind enough to sponsor.

I began an interest in radio around the age of 13 with a Hallicrafters S-107 receiver and was immediately hooked on DX SWLing. Soon after a group of us in our neighborhood discovered amateur radio and began learning CW and studying to get a Novice license. First it was WN5AAR (now N5RZ) and WN5AAS (now K5NZ) getting licensed and shortly thereafter they helped me learn CW with a code oscillator built in a cardboard box and a Radio Shack straight key. In January 1970, at the age of 14, I was licensed as WN5AOF with a Eico 720 transmitter, about 3 crystals and the Hallicrafters receiver.

The three of us lived within a few hundred feet of each other and were constantly on the air trying to work any DX we could hear on the 15 m novice band from our own stations. Talk about QRM from locals! We were fortunate to grow up in an area that included Collins Radio and Texas Instruments, so there were hams and engineers everywhere to help us, including N5RZ’s father K5LHO, and new friend at school WA5YMV (now K6NR), and his father W5EQ. We each participated in the 1970 ARRL Novice Roundup, and the contesting bug bit hard. Fast forward 52 years and I still get a thrill operating radio contests, especially on CW my favorite mode.

During the 1980’s I contested with well-known operators at the N5AU multi-multi station in the Dallas, Texas area. Just a few of the world class operators that were part of the crew there include N5AU, N5RZ, K5ZD, K5TR, N5KO, N5CR, N5TJ, K5MM and KN6M. You get the idea. In 1986 we won the CQ WW SSB USA M/M category, the first and only time a W5 Zone 04 station has been able to accomplish that. I was also fortunate to operate the CQ WW contest three times from VP2E. After leaving my contest station in the country and moving back to town into an HOA restricted area I was off the air for 10 years. While mentoring a friend’s father who is new to ham radio, he encouraged me to get a radio and get on the air to work him. Fast forward to March 2022 and I am back on the air with an IC-7300 and a 40m EFHW wire up about 30 ft hidden between trees in my backyard. I discovered the CWTs on Wednesdays and joined in on the fun and worked a bunch of old and new friends.

I have been married 43 years to my wife Pam and have one grown daughter who is married and works as a child advocacy public policy developer in Austin, Texas. We reside in Frisco, Texas with our cat Sabrina and recent rescue dog Tanner. I recently retired after a 22-year career as a project manager in defense electronics and telecom, and then 20 more years as a facility engineer/EHS manager for a photomask fab in the semiconductor industry.

While I was off the air after moving into town I discovered an interest in music and guitar and taught myself to play, but I am not very good! I wish I would have started to play guitar a long time ago. That led to a second career as volunteer guitar tech for The Zeppelin Project, a Led Zeppelin tribute band. We play frequently in the Dallas area and around the southwest. In my photo I am holding a replica I built of the dragon guitar Jimmy Page used while recording Stairway to Heaven.

I enjoy domestic and DX contests as well as daily DXing with an occasional ragchew. Thanks for the opportunity to join CWops and I look forward to meeting each of you on the bands.