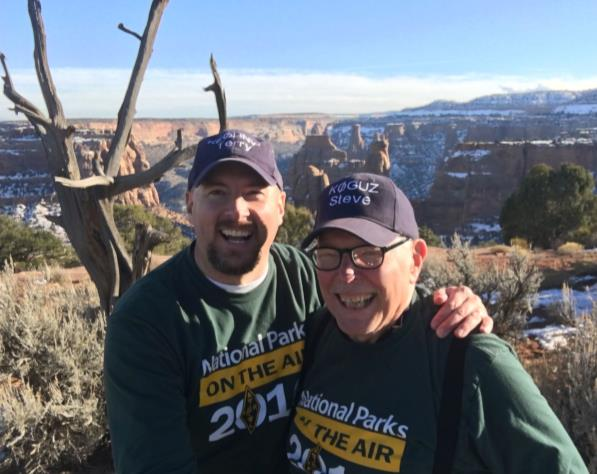 I must have stopped by Gene Link’s house at a particularly good time. It was 1961, I was 16 years old, lived in Boulder, Colorado, and had always wondered about the small house with the gigantic antennas a few blocks from our house. So, being young and naive, one day I knocked on the door, and a distinguished older man answered. I told him that the antennas were interesting; what did he do with them? His eyes lit up, and he invited me into his living room. He explained that he had been a colonel with the Signal Corps during World War II, and that he was a ham radio operator, and his call was W0IA. He talked about how much he enjoyed working stations around the globe, and he particularly liked to use CW.

He invited me back a couple of days later, and gave me the chance to look at his equipment, bathed in the warm glow from the filaments, and even let me send out a few dits and dahs on his key. I was hooked.

Fortunately, the Boulder Amateur Radio Club then offered regular Novice classes, and I persuaded my parents that getting a ham radio license was the most important thing in the world, and a natural progression from the many Heathkit stereo amplifiers and radios my dad and I had built in the previous few years. All of the instructors were enthusiastic and much closer to my age, which helped. Somehow, I got my code speed up to 5 words a minute, and I was thrilled when Colonel Link walked in the room to give us the exam.

It took the FCC nearly three months to issue my license, and my mother got sick of me coming home and running to the spot on the dining room table where she put new letters and cursing the slow bureaucracy. But finally she put a small envelope from Gettysburg, Pennsylvania, on top, and I had a callsign. It was KN0GUZ, which (minus the N, which marked you as a novice) is the one I still have.

I badly wanted the brand new Heathkit DX-40, but Heath sent my check back with a form letter telling me that they were back ordered for several months, and no, I could no longer buy a DX-20 or DX-35. Bummer. So instead I ordered a Hallicrafters HT-40, assembled it and got on the air. A group of us high school students made regular contacts just because we could.

All of us practiced the code and the ARRL’s opaque book, and got rid of the “N” after passing the General at the FCC office in Denver.

I went to the University of Colorado in Boulder, graduated in 1967 with a journalism degree; then joined the Peace Corps and was sent to Cali, Colombia. There I met a fellow ham at the consulate, who I’m convinced was a CIA spy, who let me operate his very expensive rig as K0GUZ/HK5. I came back, went to law school, graduated in 1971, passed the bar exam, moved to western Colorado and after about nine months as a deputy district attorney, was appointed as the youngest (by about 10 years) county judge in the state. I met my wife in Rifle, and we raised three children there. I retired after 31 years as one of the longest serving judges in the state. We moved to our current QTH in Grand Junction, Colorado three years ago.

There’s always been something new in ham radio that has been interesting and challenging. My profession has nothing to do with electronics or radio, but computers, APRS, packet radio…they’ve all been fascinating. Lately I’ve discovered DMR, QRP operation using my KX3, NPOTA (the photo is of me and my son Terry, KE0HNW at the Colorado National Monument on the last day of NPOTA in December, 2016). And thanks to K0UK, I’ve discovered CW contesting, and thanks to the regular CWT contests on Wednesday, I’ve increased my code speed. Those nice and quiet 25 kHz at the edge of the 20 meter band convinced me that I really ought to upgrade, so last March, 56 years after getting my General, I finally upgraded to Extra. I checked twice to make sure that the form indicated that I did NOT want a new callsign. After all those years and after amassing a collection of ham radio license plates (which started out on a Renault Dauphine, and now identify my Mazda Miata) I’m attached to K0GUZ!

My equipment is a KX3 and thanks to the HOA, a G5RV in the attic.

I hope to work more of the members of CW OPS on Wednesdays and in other contests.