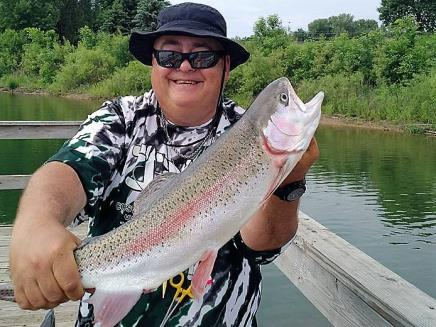 I’ve had a long history with radio, but relatively speaking a fairly short time in ham radio. As a kid, I was fascinated with an old shortwave radio given to me my by my grandfather, a Zenith Trans-Oceanic that he fixed and restored. I served in the Army from 1984-1990, and got to use some top shelf Watkins-Johnson receivers & direction-finding equipment, supporting Field Station Augsburg, West Germany, as a Voice Signals Intercept Analyst (Russian) 1988-1990. In 1997, I decided to take the plunge; I got my ham ticket (KC0BTD) in February 1997 and made my Extra in November of that same year.

I was lucky enough to run into 3 local hams when I was first starting out; Mike Sigelman, K0BUD (not a CW guy but a legend in the Twin Cities ham community), Al Dewey, K0AD (CW Ops #138) and Dave Ranney, KT0R (SK). Al & Dave really pushed me and helped get me involved at a higher level than I ever thought possible, both DXing and contesting. One could never hope for better Elmers.

I’ve always operated from a small setup at my home station. Right now, running a FT-1000D & FT-1000P Mk V, barefoot, configured for SO2R using a microHam MK2R+ interface, with 2 verticals (Cushcraft R-7000 and Gap DX Titan) and a multi band parallel dipole (Alpha-Delta DX-LB+.) I got my DXCC Mixed and CW using an FT-920 barefoot and a R7 from a “postage stamp” sized lot in North Minneapolis; moving to my current QTH in 1999 allowed an additional vertical and the dipole. I’ve had a lot of great opportunities to work from big stations; KT0R (SK), RU1A, and “The Farm” W0AIH/9. One of the highlights of my ham radio experience was being part of the W1AW/9 @W0AIH crew for IARU ’99.

I also am a member of the Minnesota Wireless Assn Contesting Club, the Twin City DX Club, FISTS-NA (#4955), the American Legion Radio Club, and the Anoka County ARC. One of the things I am most proud of during my ham radio experience is having had a small part in resurrecting MWA and getting the Minnesota QSO Party put together. The reformed MWA and MN QSO Party took off and brought together a whole bunch of our superb MN/Western WI/ND/SD/IA contesters in the “Black Hole” of Zero Land; they have shaped the MN QSO Party into one of the best state QSO parties in the country, and turned MWA into a national club powerhouse. I’m glad to have had a small bit part in reforming MWA and getting the MN QSO Party off the deck.

In addition to my current and former domestic calls signs, I also am the Trustee for the club call WK0V. I have also operated as R1/K0XQ (March 1999, from contest station RU1A, and DOSAAF station “Yunost” RZ1AWO, both in St. Petersburg. I also operated as EW/K0XQ in January from 2004, from the QTH of EU1SA (now VE3IAE) in Minsk.

Professionally, I spent 25 years in finance before moving to private consulting. I have a B.A. from the University of Minnesota (Russian Language & Literature/Russia Area Studies), a M.A. from Norwich University (VT) (Diplomacy & Conflict Management), and I have currently completed all of my classwork for my PhD in Public Policy and Administration; now working on my dissertation.

Outside of work and radio, I am an avid outdoor enthusiast, especially when it comes to fishing. I compete on the NAIFC pro ice fishing circuit, as well being a member of the the USA National Ice Fishing Team for the past 7 years. I currently serve as Secretary on the Board of Directors of the US Angling Confederation and the USAC Executive Committee. I’ve already sent in my paperwork to operate abroad at the XV FIPSed World Ice Fishing Championship in Temirtau, Kazakhstan in March 2018 as UN/K0XQ, and hopefully will also be QRV as RA/K0XQ with the USA National Team at the X FIPSed World Predator Fishing Championship this September in Konakovo, Russia.

I am a member of Trout Unlimited, the Ruffed Grouse Society, the National Rifle Association, the American Legion, the Federalist Society, and the United States Chess Federation.