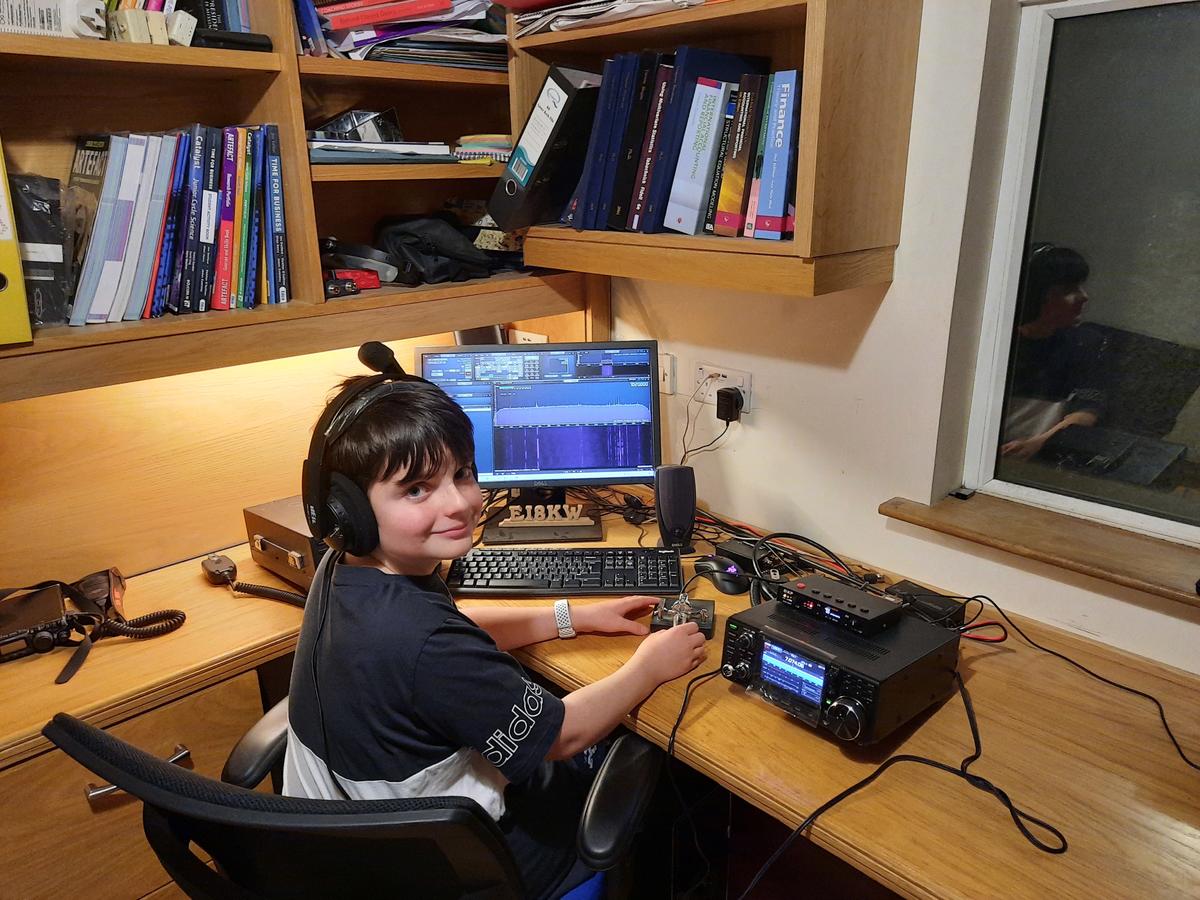 I would like to thank Doug KR2Q for introducing me to CWops and then nominating me. Many thanks also to my sponsors Filipe CR6K, Bert F6HKA, Philipp DK6SP, Sven DJ4MX, Chas K3WW, and Tim K3LR.

I first heard and became interested in CW after a visit to the Titanic Museum in Belfast. The tour guide discussed Morse code and how it was used in the SOS Titanic distress call and other interesting facts. I decided to learn Morse code and downloaded an app to my phone and started practicing.

I found out later that there was a Morse test and decided to aim for that. A few months and a lot of practice later I passed the morse test and Dave EI4BZ CWops #3224 asked if I was going to try for the theory part, I had a look at the syllabus and it seemed fairly difficult. I had no radio or had never even heard an amateur radio call.

I looked online and came across the ARRL website it said “study to pass the test. You will gain knowledge as you start to operate. An amateur radio license is a license to learn.”

So, I got some study books and started to see if I could understand any of it. There was a lot of theory and regulations: I had to learn phonetic alphabet, Q codes, country callsigns etc. After a lot of study, I somehow managed to get a pass and got my callsign.

I got an IC 7300, a smart tuner and some wire and went live. I put my callsign on QRZ.com but QRZ redesigned it with all the flashing stuff (not me). I started CW on the FISTS frequencies my signal was weak, but I made many QSOs, and people were very helpful and patient. I later got a second hand FT1000MP MK V which gives a bit more power. Peter G4LHI (now sadly SK) always seemed to be listening on the 80 m fists frequency, he would always answer my “CQ Fists” we made many CW QSOs, and he showed me endless patience (miss you already). I watched some contesting YouTube videos and was amazed at the effort these contesters put in. I wanted to hand out points to them so started contesting. Even if I only have an hour or two, I try to give out points to as many as possible and I always send in my log.

Then came Youngsters on the air (YOTA). I operated EI0YOTA from home and made many calls. Then Richard 9A1TT put out the call for young operators required for YOTA contest station 9A21Y remote operation to a superstation “No experience necessary.” I applied and now I am part of the team along with 9A5MX, F4HWS, F5SNJ, KA4RLL, S56A. Philipp DK6SP spent over an hour showing me how to do remote station operation (thanks Philipp). The team had some very good operators and, in the chat, started talking about 30 – 32 (Was this break times?), NO! I eventually realised it was wpm.

OMG what happened to the “no experience necessary” part? The situation became clear this was a very good team and I had to catchup quickly so as not to let the team down (should I bail now!) maybe they would have time to find someone else.

I decided to practice as much as possible before the contest. I needed to bring my speed up fast. The contest was great fun. Running on a big station is a great experience. The team did well and although I made many mistakes, I hope I didn’t embarrass myself too badly.

My other interests are coding (Java, Python and HTML) I am particularly interested in Artificial Intelligence (AI) and machine learning which I believe are going to be very big in the future. I used to play competitive chess but just play for fun now. I play GAA and hurling (Irish Sports) and enjoy swimming.

Thanks for having me in CWops I hope to contact many of you in the contests.