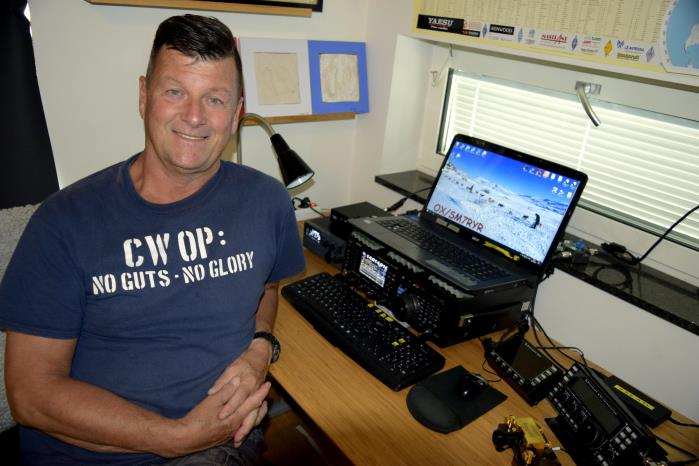 I was born in 1952 and grew up in Malmö, located in southern Sweden, only 10 minutes away from Copenhagen Denmark by train or car.

In high school I had a humanistic focus. Despite my technical interest. Then university studies were followed by the police academy.

Married and have two children.

In 1987 I took a T-certificate based on technical regulations. No telegraphy requirement. On a radio bulletin, I heard that a telegraphy studies was organized in Malmö. I signed up and in a six-month period I was issued a C-certificate at 8 wpm. Later built up with the then highest license class A at 16 wpm. Since then, I have only been active in telegraphy on HF and 6M. Never used a microphone.

Four years ago I retired. I worked as a police superintendent, mostly with organized crime, sometime within the security service, internal investigations and the last years of legal affairs.

I am a member of ARRL and regularly read QST, CQ and Practical Wireless. Previously I lived in a house with a large plot where I had wire antennas. Nowadays I live in a housing court unit. The board has given me permission to install a smaller antenna on the roof about 25 m up. It became a 3.2 m long trap vertical for 20-15 M, with nine radials. The antenna sits freely. Works FB with my Yaesu FTdx1200 and KX3.

I am most active with QRP when I do not want to disturb my neighbors. Most often I am portable. Me and XYL travel a lot around the world and sometimes my KX3 follows. It is fun to use these with simple antennas. Give QRP a try.

In some context in 2016, I entered the CWT website and saw their Wednesday activities. I called in and thought it was interesting. I also read the old newsletters. It contained very solid material just about CW.

At the end of July 2017, I received a request from Mats RM2D about nomination if I was interested in joining the club. Then I quickly received support from N3JT, IT9MUO, VE2FK and became a member on July 31 and got number 1855. Thank you very much.

Telegraphy is to me the ultimate relaxation in the now-connected world.

Last year, I began to participate in various competitions with my simple equipment – it is a new challenge for me. Very exiting.

Other interests besides ham radio include hiking in wilderness (British Columbia, Alaska or north part of Sweden), photography, fitness, travelling and discover new countries and cultures.