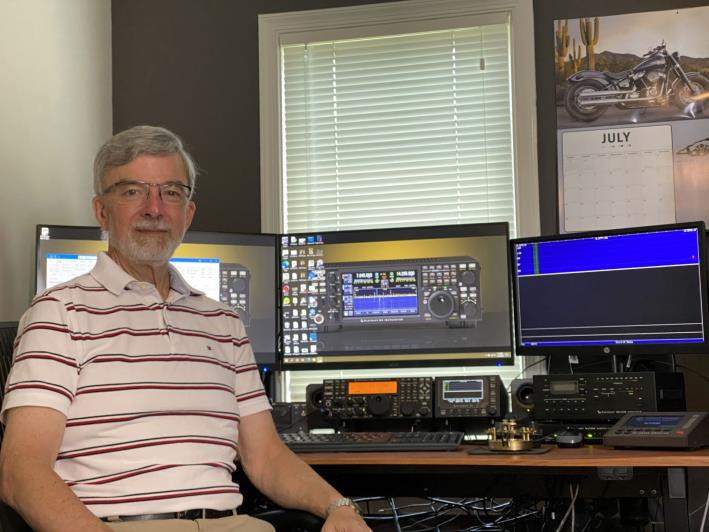 In the mid-1960s, my dad deployed to Antarctica as a pilot for the US Navy. I was in junior high school at the time, and the only way to communicate with him was handwritten letters that had a transit time of 2 weeks in each direction. One evening my mom answered the telephone and started talking loudly and saying “over” whenever she stopped. She called me over and asked if I would like to talk to Dad. I was totally confused but did have about a 30 second halting conversation. I was a watershed moment in my life because I became an engineer at that instant. I have spent most of my life trying to figure out just how that conversation worked.

I got my Novice ticket at the age of 16 in 1968 at the club station at NAS Lemoore, Ca. I remember operating a DX-35 with a 75S-3 receiver. We relocated to the east coast where I built a Heathkit DX-60B and SB-301 and was active for a while, but school and other activities caused me to move away from the hobby, though I never lost interest.

In 1977 I had completed college and was in the Navy myself, getting ready to deploy to the Mediterranean. A squadron buddy convinced me to drive up to the FCC office in Savannah, Georgia and take the general exam since he wanted help manning the ham station on the USS Saratoga. I brushed off the SB-301 and listened assiduously to the W1AW code broadcasts. I managed to pass the code, General, and Advanced exams. When the lady asked me for my callsign so she could give me my interim license, I told her I had no license. She sheepishly informed me that I needed to take the Novice exam since I was currently unlicensed. I have never been more nervous about a test but managed to pass.

I spent 5 years in the Navy and ran thousands of phone patches for sailors and their families. It was great to give back that experience to others. I then started a 40-year career as an engineer doing work in the data communications and defense industries. And it all started with that phone patch back in the sixties.

I am now retired and just completed building my first station that has a rotating HF antenna, and I’m having a blast.

Beyond ham radio, my dear wife Kris and I love to hop on our Harleys and head west to the Blue Ridge mountains and beyond. We did our “bucket list” trip in 2016, circumnavigating the lower 48 states over a 6-week period. I put an APRS tracker in the bike for that trip and published an article in QST with the results.

Ham radio has been more than a hobby for me. It has provided fertile ground to explore new ideas and make wonderful friends. I wish I had a chance thank that selfless ham who helped me talk to my dad.