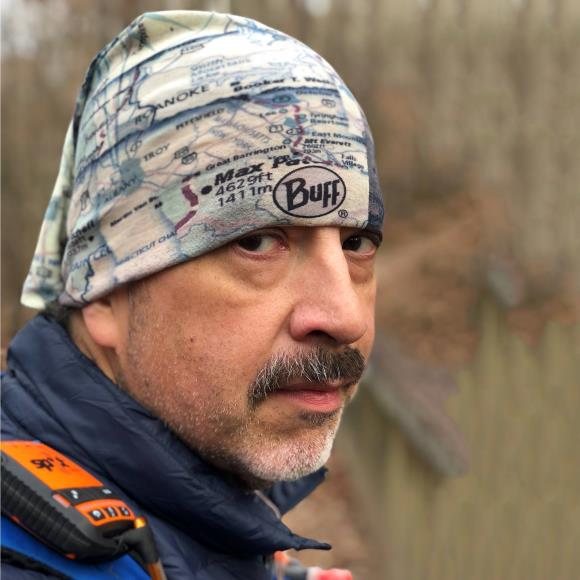 First, I just want to say that I am honored to be a part of this great organization. Many thanks to W6LEN for sponsoring me!

My ham radio journey began when I joined a wilderness Search and Rescue (SAR) team which uses HTs for communications during call-outs. I do a lot of hiking and backpacking in the North Georgia Mountains and on the Appalachian Trail, so I felt my knowledge of the area could be helpful. I tested for my Technician license, missing just one question. So, at this point I had my license which was required for SAR work. No need to go any further, right?

A few days later I’m talking to a friend I’ve known since high school and he mentions something called SOTA. “What is SOTA?” I asked. Summits on the Air. Summits? Now you have my attention. He explained the concept and I was instantly intrigued. I can use this shiny new license while out hiking!

I activated a few SOTA summits with VHF, amazed at how far I could get from the summit of a 3000ft mountain running 5 watts. I then discovered Parks on the Air (POTA). Living 7 minutes from a POTA park, I tried some VHF activations with no success. Apparently, there is a huge difference between getting 4 QSOs from a summit vs 10 QSOs from a low-lying park when running VHF!

I tested for my General a month after my Technician test and passed. SSB to the rescue! I purchased an FT818 for SOTA, an FT891 for POTA, and did numerous POTA and SOTA activations with those rigs. Life was good, but my back and legs were not appreciating having to lug 7lbs of equipment to a summit.

In Dec 2019 while on a SOTA expedition with my SOTA team, one of the guys brought along his MTR3b. What is this? A tiny radio, with an even tinier battery? Oh, it only works CW using Morse Code? I guess I need to learn it.

I started my CW journey in January of 2020 using online resources and apps. My first CW QSO was on March 3, 2020 using a CW Morse Nano straight key to chase a POTA operator for a park to park contact. A few months later, I finally worked up the nerve to attempt a CW SOTA activation. On July 4, I garnered 15 CW QSOs, including my Elmer! At this point, I was officially hooked on CW.

I originally thought CW would augment my portable ops, but I fell in love and now operate almost 100% CW. My complete SOTA rig is down to 29oz, with my primary radio being an MTR3b. I also have kit built 17m and 60m QCX Minis which will sometimes go into the field with me as well. My longest DX was with the 17m QCX Mini during a SOTA activation of Coosa Bald in North Georgia. The first person to come back to me sounded like “ZL.” No way, really? I asked for a repeat and it was, indeed, ZL2IFB from New Zealand. 8400 miles with 4.2w!

I continue to hone my CW skills and hope to be on the air more from my QTH later this year when I get moved out of my current apartment. I look forward to learning from and working many other CWops members in the future!