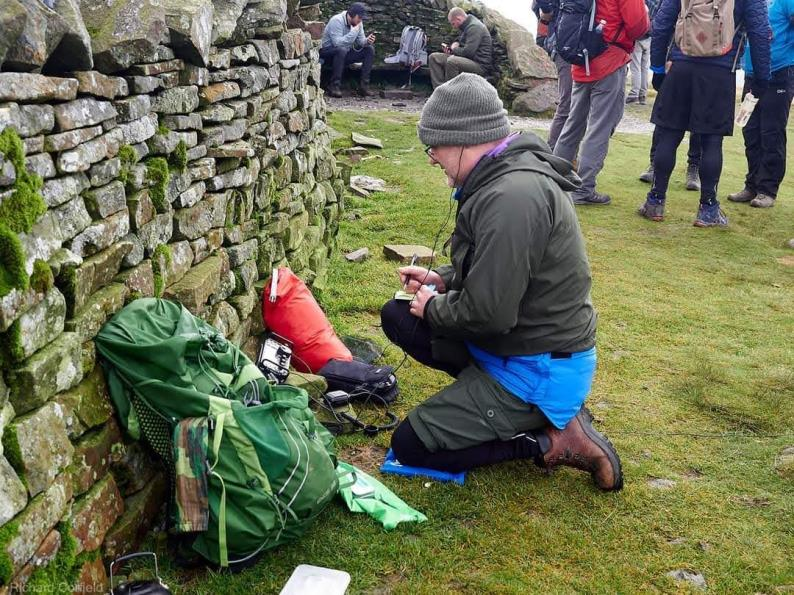 With thanks to my instructors Peter GM0EUL, Keith G0HKC and Kit G0JPS, I have finally reached CWops! It has taken a lot of practice. The courses have been great, working through character by character into word by word head copy. I’ll keep on practicing to improve but am happy now that a lot of what is on air is now accessible to me. I really am enjoying CW as a mode.

My interest in CW comes from SOTA. Lightweight equipment such as the MTR3B is easy to carry along with a resonant antenna and telescopic pole. Even at 5W I can reach large distances and find myself in pileup situations. I bought a second hand KX3 for SOTA, but CW allows me to forgo the SSB capability and carry an even lighter kit. The photograph was taken on Whernside (G/NP-004) a few weeks ago by M0DCD who was operating 2m FM. I’ve also been seen quite a few times around the parks near my work and home experimenting with portable setups.

I first encountered CW in the 80s playing with other kids on a bonfire night and being impressed by the flashing light signals sent across a field. Children’s flashlights in those days had Morse sending buttons on them for this purpose, along with red and green filters for some reason. My first foray into radio at a similar age was the crystal receiver project with 80 turns of enameled wire on a toilet roll core (tap at 20), a 500pF variable capacitor and a Ge diode. I had a wire to a tree in the garden then, and I have wires to trees in the garden now. It was only natural that I went on to study engineering. Like many I was sucked into the dot-com boom and now work with computers, but still love all things engineering. I wish I could do it all! But there’s so much out there and not enough time!

I was first licensed as M6RJC sometime around 2007. I met RAYNET, the UK emergency radio network, while on duty with St John Ambulance and thought wouldn’t it be great to have those skills as well. Intermediate (2E0RJC) and Full (M0RJC) licenses quickly followed, helped by the engineering degree. Much of my experimentation is with antennas, sometimes microcontrollers and other circuits. I’m with RAYNET, St John and also Scouts with my own children, who are starting to show some interest in radio.