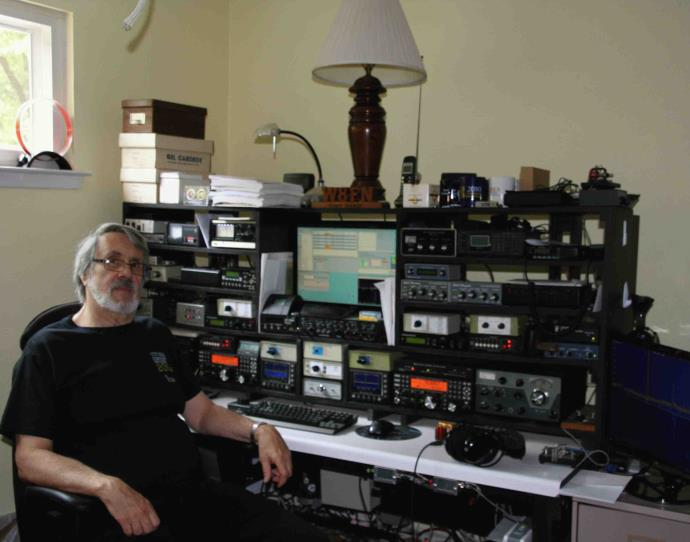 I was born and raised in Owensboro, Kentucky. Starting as a SWL with first an Allied Ocean Hopper and then a now-forgotten brand console radio with a couple of short wave bands. In 1964 I took the class sponsored by the Owensboro Amateur Rdio Club and passed the exam for Novice. I was issued WN4TTE in June 1964. With a crude station consisting of a Lafayette HE-40 receiver (a Japanese clone of the Hallicrafters S-120) and an ancient Heath AT-1 transmitter, I managed to make quite a few 40 meter contacts. In 1965, shortly before the Novice ticket was due to expire, I passed the Conditional exam and went on the air as WA4TTE.

Throughout my high school years I was active as WA4TTE, either ragchewing or DXing on 40 meter CW or handling traffic on the Kentucky Traffic Net (KYN) and the 9th Region Net (9RN) on 80 meters. I first upgraded my transmitter to a borrowed homebrew 75 watt VFO transmitter built by WA4KFO (an engineer at the GE Owensboro tube plant who did much of the original work on adapting TV sweep tubes for HF linear amplifier duty) and then picked up a Heath DX-100. I well remember what my Elmer W4OYI said when I dragged the DX-100 home and first put it on the air — “Get it off!”. The cathode keying with my bug produced dits on one frequency and dahs on a slightly different frequency, with a good measure of key clicks thrown in as a bonus. I got to work modifying the thing and after a fair amount of work I had converted it to a differential keying scheme similar to that used in the Johnson Ranger. It actually produced an acceptable, if drifty, signal after these modifications. I wasn’t the least bit interested in phone, so I just removed all the modulator circuitry while I was at it to reduce the load on the power supply.

I also began building several electronic keyers, eventually learning to use a TO-style keyer. Sometime in 1967 I managed to get a really good deal on a genuine Hallicrafters HA-1 TO Keyer, and I was good to go. As my bug skills faded, I came to grips with the electronic keyer and my code speed began to climb. I received my 30 wpm Code Proficiency certificate from ARRL in January 1967.

In 1967 I graduated from High School and decided to attend the University of Evansville in nearby Evansville, Indiana. My dad had a business that was located in the Evansville area, so in the summer of 1967 the family moved across the river to Indiana and I traded WA4TTE for WA9VZM. Also in 1967, the details of the ARRL/FCC incentive licensing were finalized. I quickly realized that if I wanted to keep operating on the low end of 40 I would need to upgrade to Amateur Extra. That fall I made the 100+ mile drive to Louisville and sat for the exam. Since I was a Conditional, I had to pass the tests for General, Advanced and Extra at one sitting. I did manage to talk the FCC examiner into giving me the 20 wpm code test right away. Using my traffic handling experience I handed in a perfect copy of the receiving test text with every 5th word slashed off so I could get the check right.

The college years of 1968 through 1971 went pretty quickly. I spent most of my on-air time on the traffic nets and working DX. I did manage to get my CP-35 certification in 1969. Upon graduation in 1971 I went to work for a short time in southern Indiana. Early in 1972 I accepted an offer of employment with the US Air Force at Wright-Patterson AFB in Dayton, Ohio. With this relocation my call was changed to WB8MKZ (really ugly for CW) and I continued to mostly operate on the traffic nets. My antenna at a small apartment was pretty poor, and I really didn’t work much DX. I did participate regularly in the old ARRL CD Parties, which further accelerated my growing interest in contesting.

In 1976 I was finally able to buy a house and put up somewhat better antennas. As my antennas improved I began to participate in more contests, especially Sweepstakes CW. In early 1977 I became eligible to request a new call, and quickly made my application. In April 1977 W8FN re-appeared on the airwaves for the first time in many years.

The antenna farm quickly grew and by the early ’80s I had two towers with stacked Yagis, including a short 2-element 40, crammed into a quarter acre lot. By then most of my activity was in contests, and I was actually starting to do reasonably well in a few big DX contests. Starting sometime around 1980 I also fell in with a group of contesters in northwest Ohio and eventually became one of the principals at the KS8S multiop station, frequently making the 100 mile drive north with my old Buick station wagon stuffed with Drake C-lines, boxes full of cables, and bunches of miscellaneous station accessories for a weekend of multiop fun.

In 1987 I took the plunge and bought a new semi-rural property north of Dayton, this time with a bit over 2.5 acres of land, and began to build a proper contest station. This ended up being a pretty good station. It featured two towers with monoband Yagis for 40 through 10 meters and wires for 80. The shorter 80 foot tower was shunt fed to serve as the 160 antenna. We began to do multi-single efforts in the major DX contests with good results. At the time I was blessed with several good young operators/tower monkeys who helped maintain the station and put in lots of operator time, including KU8E and N8SM (SK). I also did lots of single op contesting, especially in the domestic contests such as Sweepstakes that I really prefer. I also managed to complete 5BDXCC and 160 meter WAS with this station. Those were good times.

In 1997 I relocated to North Texas, just west of Fort Worth, as the result of a job change. Going from a big station with good antennas back to low wires was an interesting challenge, but I was determined to do the best I could with what I had. I began to concentrate especially on domestic contests, where my antenna deficit was not as critical. I also discovered that Texas is a great place to be for Sweepstakes. In 2001 I finally put a small triband Yagi up about 25 feet on a roof tower. This greatly improved my signal on the high bands.

In 2005 I undertook the biggest life change of all when I got married for the first time at age 56. For various logistical reasons, it made the most sense to move into my new wife’s house in the city of Arlington. So I was back to where I started almost 30 years earlier, on a 0.2 acre lot with no room for antennas. This time there were NOT going to be any towers in the back yard, so I began planning my new station carefully. I ended up with a 3 element SteppIR on the roof tower at about 35 feet. I put up a 50 foot top wire loaded vertical for 80 meters that does double duty as a support for a 40 meter inverted vee and a 30 meter end-fed wire. The 160 meter antenna is an inverted L that goes about 30 feet up a tree and another 100 feet or so to a tree in the front yard. A K2AV Folded Counterpoise eventually replaced the radials there weren’t room for, and I found to my surprise that I can actually get myself heard on 160.

Beginning in 2008 I began a serious station building effort to put together a state-of-the-art Single Operator Two Radio (SO2R) station that is limited only by the quality and quantity of available antennas. My design goal is to have the radio hardware completely ready to support a retirement station with real antennas. The station is and probably always will be a work in progress, but it works really well. I’ve been especially gratified with the results I’ve achieved in Sweepstakes competing against stations with superior antenna systems. I have placed first in the North Texas section in Single Operator Low Power class in Sweepstakes CW for the last seven years, winning the West Gulf Division title in that class five of those years. I have also worked enough DX to get on the DXCC Honor Roll with 350 Mixed (334 active) and 330 CW.

I’m currently partially retired, working 3 days per week. Within the next few years I expect to retire completely. Upon retirement we plan to move out of the city and I’ll finally be able to have a decent antenna system again, although I have no intention of building up a multi-tower installation.

For now I’ll still be on the air from Arlington. I hope to continue working lots of the CW Ops for many years to come. Thanks for the QSOs and may there be many more..