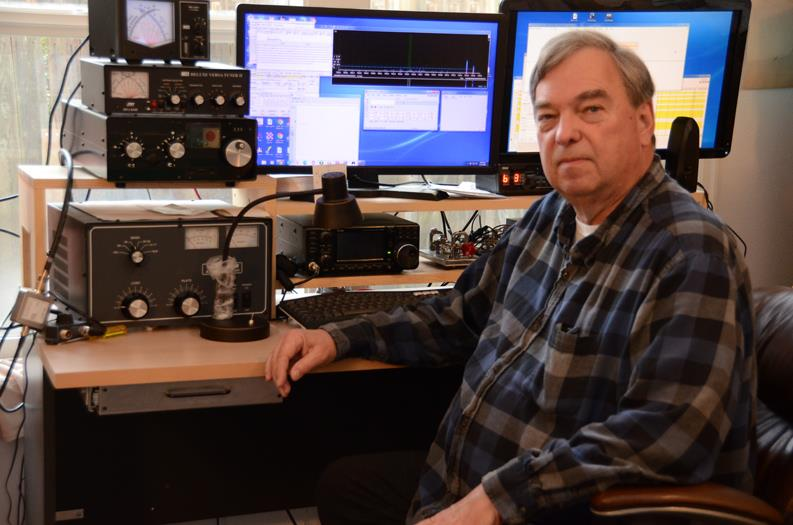 I want to thank my CWA instructor, Rob K6RB, for the great class instruction. His guidance and expertise, and cheerleading, were a great help. I also want to thank, Van N5TOO, who co-nominated me, and thank Frank K1EBY, Eric KK0ECT and Carl WS7L as sponsors.

When I was 14, I tried listening to CW on a shortwave radio and I just couldn’t detect individual letters. Shortly thereafter I went on a trip on a Norwegian freighter. Since there were only 7 other passengers on the ship and I was decades younger than the rest of the passengers, I chose to hang out in the radio room with the radio operator. He used to receive speed skating results from Norway in Morse code. The ship’s callsign had one letter repeated three times. (I can’t recall the exact callsign but maybe like NKKK). During one of those calls from Norway, I finally heard the repeated pattern in the ships callsign. I nearly jumped out of my chair. I had the radio operator quickly write down the Morse code for me and I practiced memorizing it while we were still traveling. I think he had one letter incorrect, so I had to unlearn that one!

I studied for my Novice test shortly thereafter and received the call WN6QLZ in 1965. I worked on my CW speed and finally passed my general test and code test, getting the call WB6QLZ. I was always fascinated in contacting DX stations and slowly improved the station to be able to work enough countries to get DXCC and join the Northern California DX Club.

Being on the west coast (I operated from Hayward, CA). I would run phone patches for servicemen during the late 60’s. Most couldn’t say where they were located but they enjoyed good conversations back home.

Away at college I operated some from W6YL at San Jose State University. After college I was busy getting married, raising a family and starting a career in Electrical Engineering, so ham radio took about a 40-year break. During that time, I did change my call to KB6MW. Once we moved to Portland, Oregon to be close to my daughter and grandkids, I connected with our city’s CERT preparedness group and started using VHF/UHF on the local repeaters.

Last year I bought an HF rig (my original equipment was given away or destroyed in the Bay Area earthquake of 1987) and put up a dipole. That got me on the air again and I started practicing my CW. A few months ago, I applied for several vanity callsigns and received my current call, WR7T. I’ve been active in CWT-minis, enjoy hunting for DX and operating from a contest station at K7ZS’s QTH.

I’m involved with the Willamette Valley DX Club, the Washington County ARES group and Tigard CERT programs. CWOps has been an inspiration for me to enjoy CW again.