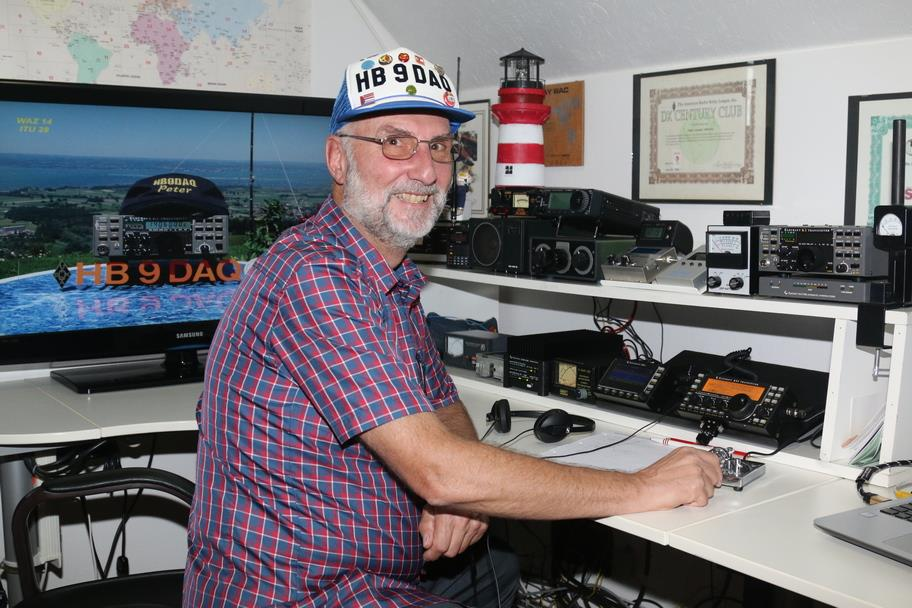 First of all I would like to thank my sponsors for proposing me for membership in CWop’s community. This includes Bud, AA3B as nominator as well as Fred, HB9DAQ, Rudy, NF9V and Jim, WT9U. I am especially pleased to be a member of the 10th anniversary year.

I was born in1955 and have been married since 1975, still with the love of my life. Together we have two grown children and in the meantime 4 grandchildren who bring us much joy.

I live in Walzenhausen on the “Balcony above Lake Constance”, on the border to Austria, opposite Lindau and Friedrichshafen (where the Europe-wide biggest amateur radio event HamRadio takes place every year).

Already with 15 years I was interested in the reception of shortwave stations. From the garbage I had saved and repaired a tube radio, which had been disposed of as defective. The device came from a Grundig music cabinet. As antenna I threw a long wire into the garden. With it I listened regularly to the KW service of Radio Luxemburg and other KW stations from all over the world. Especially the information about amateur radio operators, which was broadcasted every Sunday, fascinated me very much.

During the summer school holidays I worked as a tankboy. With the tip I earned there I bought the book “Der Weg zum Amateurfunk”(the way to HamRadio) by DL1JJ. The tube receiver described there, a 0-V-2, I built, mechanically and electronically, independently. It worked at the first go. I will never forget the first reception of a ham radio station. It was in the middle of the night and the station was from Nome, Alaska. I was totally excited. Now the amateur radio virus had infected me and I couldn’t let go.

In August 1971 I received my “Permission to create and operate a ham radio receiving station” with the callsign HE9HVG.

In 1980, after passing the “small” exam, I received my amateur radio transmission license for frequencies on the VHF/UHF bands, unfortunately without CW. The callsign was HB9RFR. Under this callsign I was QRV on all allowed bands and also made worldwide connections via the Oscar satellite. A special highlight was the connection in CW (forbidden way) on March 3, 1984 with KL7OD in Nome, Alaska. With these, actually forbidden CW exercises I made myself mature for the CW examination still to be put down around then unrestrictedly on all frequencies certified for the amateur radio and in all modes of operation to be allowed to transmit.

At the beginning of January 1985 I was so far prepared for the “large” examination.

After successful examination I received my current callsign HB9DAQ.

Despite initial radio activity I never lost the love for CW and today I am 99% active in CW.

My special interest is in DX connections with low power. Most of my equipment is selfmade. The first device I built was a Heathkit HW-7. Years later a wonderful Elecraft K2 (10W) with the KAT100 antenna tuner. Further QRP devices are a BlueCool radio of the QRP-AG and a QCX 5W transceiver for 20m from QRP-Labs. For portable operation I use a Yaesu FT817. My current main station is an Elecraft KX-Line consisting of KX3, PX3 and the KXPA100 (all selfmade as kit). All units are optimized by narrowband CW filters.

I am also a member of the Union of Swiss Radio Amateurs (USKA), the ARRL as well as the AGCW-DL (Arbeitsgemeinschaft Telegrafie Deutschland e. V.) and the DL-QRP-AG, a working group for QRP and self-building of equipment. Another interest is collecting diplomas and so I am a member of the Diplom Interessen Gruppe DIG for many years.

Other hobbies are my grandchildren, motorcycling (BMW R1200 Adventure) and travelling with my motorhome.

Since this year I am officially retired and now I spend even more time for amateur radio. Proud to be a CWops member, I hope to make many interesting connections with the members of this organization.

It would also be nice if personal meetings would be possible next year when HamRadio 2021 takes place in Friedrichshafen again.

I look forward to meeting you on the bands.