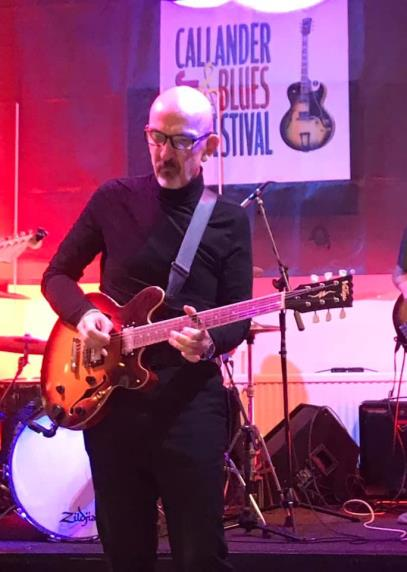 I call myself “an Italian from Glasgow”, as this describes both my origins and where I feel I belong.

In 2014 I took early retirement from an academic position, and I now belong to the endangered species called “working musicians”. A medical doctor specialising in public health and a university lecturer for 17 years, for all my adult life I’ve had a parallel career as professional recording and performing artist. A George Benson-style smooth jazz guitarist, the music I composed, recorded and produced together with my wife, Scottish major labels singer Angela Higney, has appeared on some 200,000 CDs worldwide. After the death of the record industry, around 2010, I managed to “recycle” myself in the live music circuit. I currently play between 100 and 120 professional gigs per year with a variety of jazz and blues lineups. More information, including lots of music and videos on my website http://peteparisetti.co.uk

On the amateur radio side, I was first licensed in 1982 as IK2BHX. Before leaving Italy, in 1992, I managed to earn the DXCC Honour Roll and 5BDXCC and worked 198 zones for the 5BWAZ. After moving around the world for a few years, working for the International Red Cross, I settled in Geneva, Switzerland, where I got HB9DSU. There, I worked 309 DXCC countries and 160 m DXCC, and had a few seasons on VHF and satellites. In 2014 I moved to my adopted hometown of Glasgow, where I got MM0TWX. Finally, in July 2021 I moved to the idyllic seaside town of Troon, on the West coast of Scotland, where I have the fortune of living in an attic apartment right on the beach.

As a diehard DX hunter/gatherer, I pursued my activity in Scotland using wire antennas and CW only, working so far some 294 DXCC and around 1,800 band points. Over the years I also made about a quarter of a million QSOs from a number of semi-rare DXCC countries, including S79HX, 4L1HX, 4J0/IK2BHX, 9Q5HX, J3/IK2BHX, 4U1ITU and 4U1UN. I am a member of the High Speed Club.

I have nothing against technical progress and I wish the digital modes operators every success. However, I have not been a ham and a DXer for nearly 40 years to sit and watch a computer making “contacts” for me. I am bitter and frustrated because machine-to-machine modes of communication like FT8 have almost completely taken over the bands, driving SSB and CW to near-extinction. Night after night, I tune the CW sub-bands of the HF and I often find them deserted. Then, in the FT8 window there are literally dozens of signals, most of them perfectly copiable by ear. This frustration pushed me in 2019 to create the True Blue DXers Club (http://tbdxc.net), which, now strong of nearly 1,800 members worldwide, strives to promote person-to-person activity on SSB and CW on the HF bands. The Club organises the yearly DX Ultra-Marathon (htpp://tbdxc.net/marathon).