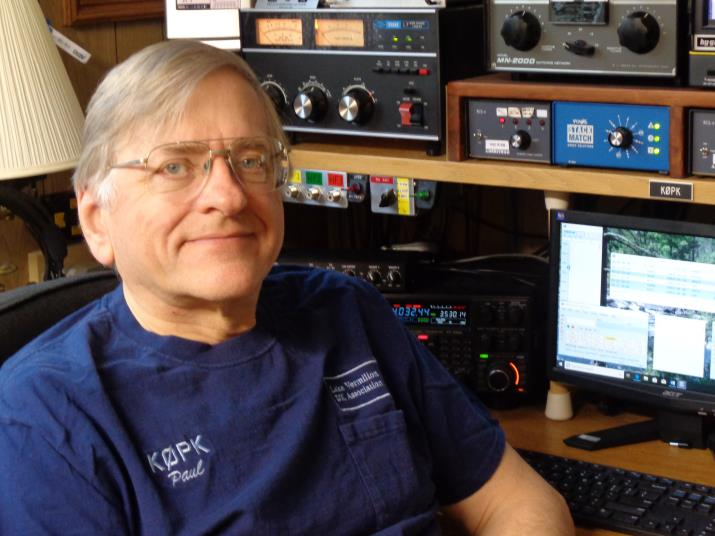 Many thanks to Jim, N3JT, for nominating me to CWops and to those who quickly sponsored me. What a nice surprise! I’ve just started playing in the weekly CWTs and they sure are a lot of fun!

My first exposure to radio was with an old SWBC console radio, given to me by my grandfather. Around that time, my dad was the manager at a local 1KW AM broadcast station and I was able to get a tour of the transmitter room. The sight of those orange-glowing 4-400A’s in the RCA BTA-1R was captivating!

I “fell in love” with ham radio in 1968 at age 15 starting with a General Class license (WA0UPD).Paul, W0AIH (SK) was my “Elmer.” He had a home brew amplifier that used the same kind of glowing 4-400A’s that I had seen at the radio station. I was hooked! He was instrumental in getting me involved with contesting, DXing, CW and our favorite band, 160 meters. I received my current callsign in the late 70’s, before the vanity program started.

Along the way I acquired commercial First Class Radiotelephone and Second Class Radiotelegraph (w/Ship Radar) licenses. All of that combined with degrees in Electronic Engineering Technology & Management, and NARTE Master certification, ultimately led me through a 47-year career. I’ve recently retired after 36 years of service in local government public safety communications engineering & management, with a prior 11 years at a mining company as an electronic tech.

I learned to love CW because in my earliest ham days we lived in a TV fringe area. TVI was a constant issue and the only way I could get on the air without causing problems was by waiting until late at night when the TV was off and the rest of the household had gone to bed. Using CW and headphones kept my operations from disturbing the family and to this day my default mode is CW. I do get on SSB occasionally and sometimes RTTY in contests, but CW is, to me, “real radio.”

In recent years I’ve been interested in antique “1929-style” radio technology and have participated in several of the old-time radio contests sponsored by the Antique Wireless Association. Building and operating with the ancient technology has given me a deep appreciation for the work of the early radio pioneers, leading to the wonderful equipment we often take for granted today.

We have it so good compared to what the old-timers had!

My current home station consists of an eclectic mix of old and new equipment in a modest SO2R setup, covering 160 through 6 meters. The antenna farm consists of a single 90 ft. Rohn 25 with three stacked 3 element triband Yagis (one rotary, two fixed), rotary dipoles for 40m & WARC bands, wires for 80m & 160m and a small Yagi for 6m.

The whole tower is used as a slant wire-fed vertical on 160, tuned with a KAT500 in the shack. It plays well. I’ve worked QRP 160 WAS in a single weekend contest and also EU, SA and OC DX with 5 watts on Top Band. Not too bad from the Mother of Black Holes in northeast Minnesota!

Because my home QTH has a lot of neighborhood RF noise on the low bands I set up a little K2 remote station at my RF-quiet cabin QTH, 36 miles away, as a remote receive site. It’s often been a big help for working weak-signal low band DX that I couldn’t hear at home.