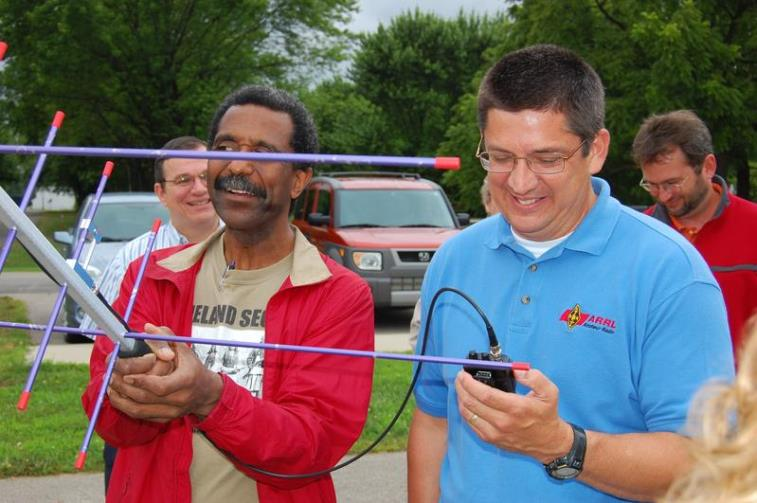 My interest in ham radio started in 1983 when my father-in-law, N4DIT, made it very clear that if I wanted to marry his daughter, N4NRN, I would have to at least get my novice ticket and I would need to learn Morse code. A few months later I had my ticket.

I had two careers. The first started in 1981 when I joined the United States Navy. The first 10 years I repaired ships. I then completed Non-destructive Training School in San Diego. I would spend the next 11 years performing radiography, magnetic particle inspections and other inspections on shipboard structures. I was also heavily involved in ship repair, planning, firefighting and training. In 2002, after serving on 5 ships and two shore facilities I retired out of Great Lakes as a Senior Chief Petty Officer. It was that last command that I found out enjoyed teaching.

My other career was teaching 5th and 6th grade at two different school districts. The first was Zion District 6 and the last was Kenosha Unified School District 1. I enjoyed this second career very much but ended up being medically retired in 2018 after nearly 13 years in the public-school system.

The best part of that brief career in education was holding after school ham radio clubs for each school that I taught. Many of those students would earn their ticket. We would have a complete “shack” set up and would be active in the school club round ups or other contests.

I also enjoyed a part time gig with the ARRL’s Teachers Institute for Wireless Technology. I spent my summers from 2006 – 2013 teaching one or two classes either in Newington and Sacramento the basics of electronics and ham radio to teachers from around the country.

During my two careers I was mostly active on the local repeaters and chased DX when I had time. Prior to 2017, I rarely worked CW. My CW skills were not sharp. When I was taught CW in the early 80’s it was done just to get my novice license. So, I listened and sent at 5 wpm and counted dit’s and dah’s. I also wrote everything down on paper and wondered why anyone could send and receive so fast.

In March of 2017, I took a year off from ham radio. My health was the major reason. The years of repairing ships had taken its toll on my body. I ended up having 3 major surgeries in 4 years to repair damage to my spinal column.

In March of 2018 I was medically retired from my second career. So, what does a recent retiree do? I dusted off my old equipment and added a few new pieces. I got back into HF and started working on my CW skills.

After a few months I managed to get my speed up to 13 wpm. However, I still struggled with head copying. One day I was looking through some old QRZ posts and someone suggested to improve my CW skills I should take the CWops class. I signed up for a class in the spring of 2019. Dallas, K1DW was my facilitator and Frank, K1EBY was his associate advisor. That was the best CW training I ever experienced.

After that class I was sending and receiving at 20 wpm. I started working contests and the CWTs. I was hooked on CW. This past spring, I took the next level class. Dave, W8OV was my facilitator and helped my get to 25 wpm and beyond. Suddenly the CWTs did not seem so fast and I am able to hold my own. Now about 95% of my QSO are CW.

As for my family, I am married to Michelle, (N4NRN) and have two adult children. My son Josh is KC9BXK. We have four awesome grandkids.

I want to thank my CWops instructors and CWops members that have helped me along the way. I intend to give back. This fall I will be Dave’s associate advisor for a beginner’s class. I hope to facilitate my own class this winter.

Finally, I am the guy wearing the blue shirt in the pic.