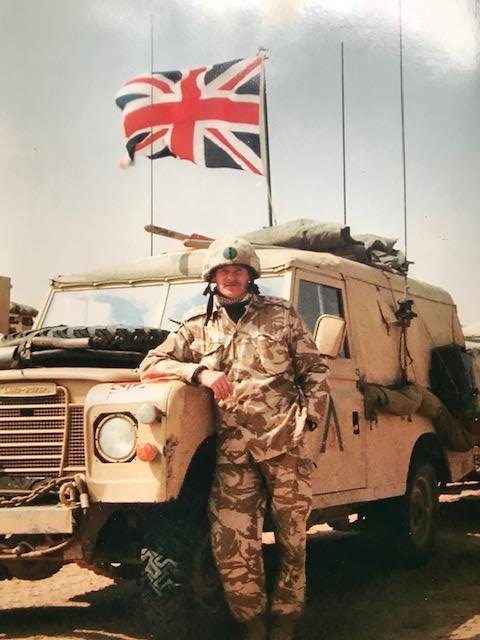 First of all, I would like to thank Bud AA3B for nominating me for CWops membership and my sponsors, Roger G3LDI, Emil I5EFO and Carston OY1CT, I am very pleased and proud to have been accepted as a member of CWops and I will most certainly uphold the mission to pursue and project the art of CW.

I am married to my wife Pamela of some 41 years and still going strong, we have 3 children all doing well in life and their chosen professions.

My wife and I live in the market town of Driffield, East Yorkshire. Our house purchase was governed by 2 criterion: 1, it had to have at least 3 bedrooms (it does) and 2, the garden front to back had to be in excess of 102 feet long (which it does and the G5RV lives therein).

At the age of 16 I decided to join the army. Of course at the age of 16 I had to obtain my parent’s permission and blessings for such an adventure so a burly army sergeant from the recruiting office came to visit to explain things to my parents; somewhat tricky because I hadn’t actually told my parents of my future intentions!! Anyway, permission was granted by mum and dad and I was summoned back to the Leeds office for the sign up. I sat some psychometric tests, took the Oath of Allegiance and received the Queen’s shilling.

The army recruiting system chose me to train as a radio operator, and that is how it all began. The trade training was over a 12-month period and I graduated at 20 wpm CW.

I served for some 26 years most of which was hands on radio operations and then through promotion and other appointments, transport and logistics.

At my 22-year service milestone, in 1988, I was commissioned to Captain – Royal Corps of Transport.

In October 1990 I was mobilised and sent to Al Jubail, Saudi Arabia for the build up to the mission to free Kuwait from its Iraqi aggressors – Desert Storm and served throughout the conflict returning home in March 1991.

In 1982 I was introduced to amateur radio by G4EJP (SK) an instructor in one of my radio training teams. I had moved to Perth, Scotland on a new appointment so I joined the Perth & District Amateur Radio Club and studied for the City and Guilds Amateur Radio Certificate; duly passed I went to the Aberdeen Coast Guard Station and sat the A licence morse test at 12 wpm, passed that and G4SMB came in the post a week or so later and still going strong.