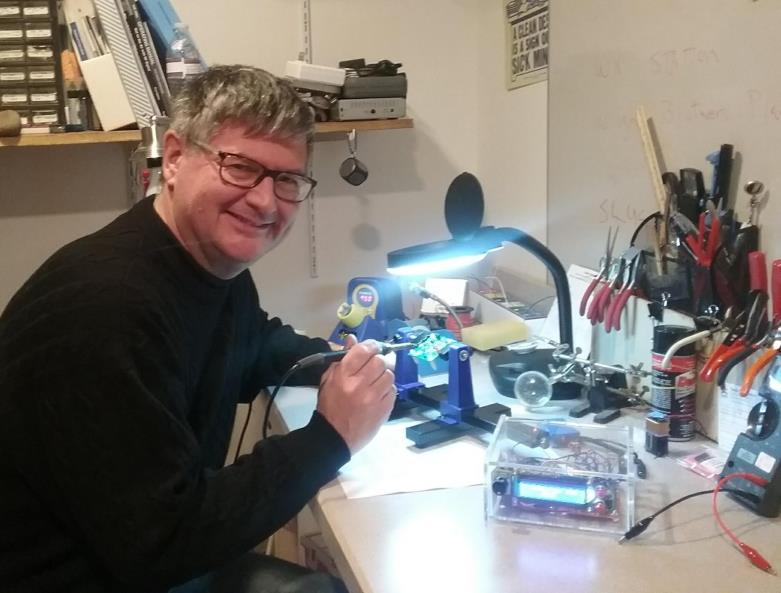 First, let me thank Gary, N5PHT, for nominating me to CWops membership, as well as my sponsors, John K4BAI, Jim N4TMM, and John N8AA. I would also like to thank my CW Academy instructor Jerry, AC4BT, for giving me the confidence to put my pencil down and start to copy in my head. The CW Academy is one of the greatest gifts that CWops provides for the ham community. I would like to get involved with the CW Academy and give back to my fellow hams.

The CB Craze of the 70’s was my introduction to radio. I started with a base station and antenna on the roof and talked to CBers up and down the Hudson Valley. It was during one of these conversations that I learned about ham radio. Living in a small town with no hams the prospects of learning about ham radio and getting a license were slim. However, my father found a ham in a neighboring town and he became my Elmer, teaching me code and theory. To this day I do not know how my father found my Elmer, but I am forever grateful that he did. When I left for college there was an active club station and local club, so I was able to pass my novice exam and received the call KA2DYG. My first rig was a Kenwood TS-520 with dipole antennas and I was on the air in the Novice bands working the world on CW from my parent’s home during the summer until I graduated.

After graduating I remained active, setting up my station in the basement using various radios and experimenting with different antennas. It was at this time I discovered kit building and QRP and DXing. It is amazing that a pile of components can be soldered together to capture someone’s signals from across the world. There is something special about making a QSO with a rig that you’ve built. This was also the peak of the sunspot cycle and every QSO could be DX or even a new one.

Building a home, family, and career occupied the next several years and unfortunately there was little time left for radio. The kids were all active in sports all throughout college, so I spent a great deal of time on soccer and field hockey fields. Even though I was not building nor operating, I did stay involved with the local club and when possible participated in service events. Eventually, the last child graduated, and I found myself with more free time. It was time to head down to the basement and get back on the air and pick up the soldering iron.

The April 2016 issue of QST arrived and the article “A Modular 40 Meter CW Transceiver with VFO“ (AKA Forty-9er) caught my eye. Starting with a crystal transceiver, the crystal was removed and replaced by a digital frequency synthesizer that was controlled by an Arduino microprocessor making it a Software Defined Radio. With the help of several hams on the SoftwareControlledHamRadio list group, I completed the radio. Since completing that kit, I have built several others and I was back on the air working mostly CW.

My current station consists of a TS-570s, KX2, Forty-9er (SDR kit), QCX and KD1JV Tri-bander. My antennas are modest; a Yagi, OCF dipole and vertical and I operate using either low power or QRP. One of the many list groups I subscribe to is the QFox whose members include two of my sponsors. The QFox group has single activity which is a weekly QRP Fox hunt on HF where one person is the Fox and the Hounds try to work him. The past season I was the Fox and it is a thrill to be on the receiving end of a pile-up for 90 minutes. In addition to the Fox Hunts I also enjoy contest (mostly sprints) and will participate in the CWTs as time permits. In the future I plan to do some Parks on the Air activations, which is how I met my nominator.

I would like to thank everyone for all their help in the class and on the air. I am truly honored to be a member of CWops.